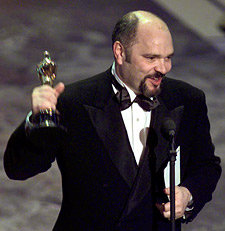 Minghella’s agent said he died Tuesday morning of a brain hemorhage. “He was operated on last week for a growth in his neck and the operation seemed to have gone well,” agent Judy Daish said. “At 5 a.m. today he had a fatal hemorrhage.”

The filmmaker’s other pictures include “The Talented Mr. Ripley,” “Cold Mountain” and “Breaking and Entering,” and he was known for his attention to film music, especially in collaboration with Oscar-winner Gabriel Yared.

He recently directed the first episode of a new series based on Alexander McCall Smith’s popular “The No. 1 Ladies Detective Agency,” which he coscripted with Richard Curtis. It airs on Sunday March 23 at 9 p.m. on BBC1.

This entry was posted in Film, News, Television and tagged 'The English Patient', Anthony Minghella. Bookmark the permalink.