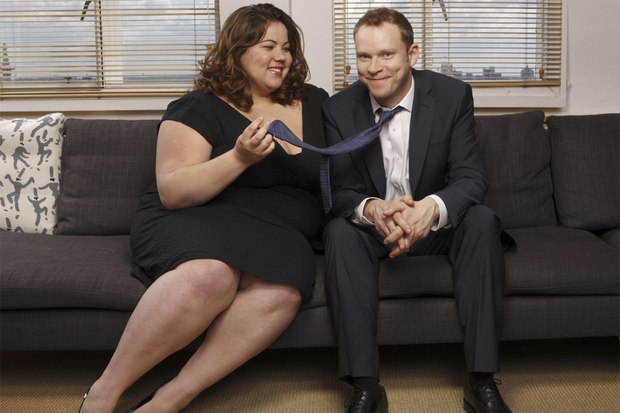 LONDON – Neil LaBute’s social comedy “Fat Pig” could easily be titled “Skinny Weasel” because it deals with a young man in love with a pretty but very large young woman and who lacks the self-confidence to ignore the derision of his workmates.

The provocative non-PC title along with performers well known in Britain from television are drawing theatergoers to see the production, but it is not as challenging or funny as it might be.

LaBute, who directs his own play, takes it as a given that the average yuppie is naturally slim and disdainful of anyone, especially a woman, who tips the scales beyond bikini weight.

When Tom (Robert Webb) meets Helen (Ella Smith, pictured with Webb) at a busy lunch table, their encounter is marked by his being ill at ease with a friendly female and her being on guard for the slightest reference to her poundage.

Still, they hit it off, and Tom soon finds himself relaxing in the beginnings of a comfortable relationship. But then slick co-worker Carter (Kris Marshall), who ribs Tom about anything sexual, sees the size of his new paramour and the mockery commences.

Things get worse when Jeannie (Joanna Page), a pretty, slim co-worker that Tom had been dating, takes umbrage over his preference for the embrace of a woman twice her size.

The play is reasonably entertaining with good performances, and it makes its challenging point well enough. Curiously, though, LaBute is not as salacious or cruel as you might expect him to be. Also, he is not helped by having his fine cast members speak in generic American accents.

There’s nothing about the play’s point that is unique to U.S. culture, and with such familiar British performers onstage, you can’t help thinking that left to themselves, and using their own voices, the humor would be far more biting and amusing.