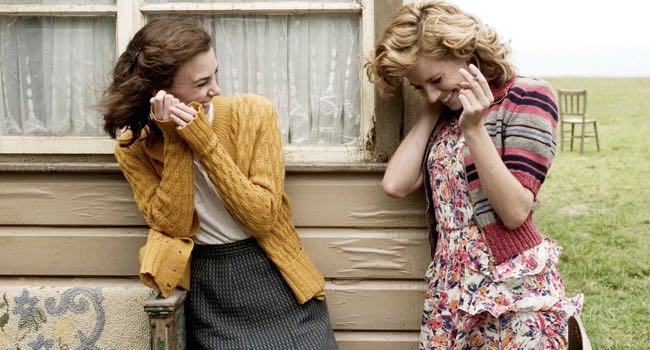 EDINBURGH — A poet, a warrior and their two lovers form a complicated quartet in John Maybury’s “The Edge of Love,” a story of wartime romance in which fidelity and trust are put to the strictest test.

The poet is the extraordinary Welshman Dylan Thomas, played with echoes of the young Richard Burton by Matthew Rhys, but the film’s literary appeal is made broader due to excellent playing by Keira Knightley and Sienna Miller as the main women in his life.

The film captures superbly the claustrophobic atmosphere of London in the Blitz during World War Two and measures the irreconcilable differences between love and war and between poetry and combat. It film succeeds as a deeply involving study of men and women caught up in a whirlwind beyond their control.

It will take careful marketing for the film to find its audience but the big names involved, the ongoing fascination with Thomas, and some excellent music supplied by veteran Angelo Badalamenti all serve it well.

Sharman Macdonald’s astute screenplay swiftly sets up the dynamic between the foursome. Thomas is a sweet and gifted man who can be a right bastard and as the film starts he is writing propaganda films as a conscientious objector. In a London pub, he runs into his childhood sweetheart Vera (Knightley), who is a talented singer reduced to performances in London Underground stations while the Nazi bombs fall.

With excellent contributions from production designer Alan MacDonald and cinematographer Jonathan Freeman, Maybury draws terrific performances from his cast. Rhys (TV’s “Brothers and Sisters”) reads Thomas’s poetry wonderfully and plays the Welsh icon with warts and all. Murphy (“Sunshine”) also brings poetry to the role of the warrior.

In the end, the picture belongs to the women as Knightley goes from strength to strength (and shows she can sing!) while Miller proves once again that she has everything it takes to be a major movie star.