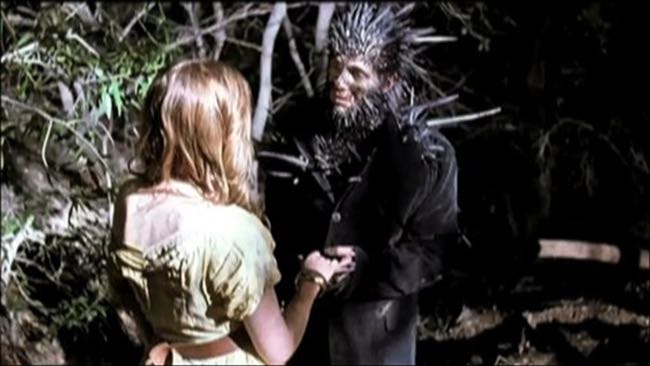 EDINBURGH – When a car full of attractive people breaks down in the woods and things start to go bump in the night, American director Robert Beaucage’s creature feature “Spike” appears to be set on a well trod path. But, no.

Oh, sure, the one guy in the group has a pipe or something plunged into his neck and spends the rest of the film bleeding to death. And two of the young women are lovers who can’t decide if it’s worth going into the forest to help Pipe Boy. They fight and one smashes the other in the head with a ski.

It’s all filmed in the dark, so it’s not clear who’s who, but one of the women wanders into the thick trees and is soon bitten by a snake. There’s a beast in the woods all right, but it turns out he’s a California surfer dude with a soft poetry-reading voice who knows how to treat snake bites except he has a body inexplicably covered with lots of sharp spikes.

Spike Boy actually knew Snake-bit Girl in a previous life and he’s built a lair for her so they can consummate their love notwithstanding the inconvenience of having more razor-sharp blades on him than Edward Scissorhands. It doesn’t end well.

Murky and misguided, with lame dialogue and cheesy effects, the film will be lucky to get a DVD release.