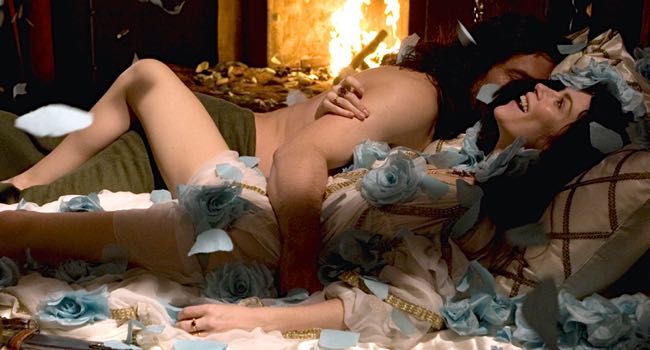 KARLOVY VARY, Czech Republic – Legend has it that Countess Elizabeth Bathory was a murdering monster, the scourge of 16th century Europe, slaughtering virgin girls by the score and bathing in their blood in order to stay young. Slovak director Juraj Jabubisko’s over-the-top English-language epic “Bathory” says history got her all wrong and she was the victim of a terrible libel.

Colorful, bloodthirsty and absurdly comic, the film had its world premiere at the Karlovy Vary International Film Festival and could reap substantial international box-office rewards from indulgent audiences with a taste for that kind of thing.

Elizabeth (Anna Friel, pictured) was adept with sword and dagger, which she needed to be in that bloodthirsty epoch. She was not averse to a little torture, as who wouldn’t be with treachery on all sides. And she wasn’t above stabbing a rival to death with a pair of scissors when the occasion warranted.

The Guinness Book of Records apparently lists her as the worst serial killer in history but screenwriters Jakubisko and John Paul Chapple say that men who wished to steal her land and riches created her evil legend. It happened a lot in that part of the world in those days with Protestants and Catholics at odds with each other but joining forces to fight the Muslim Turks.

Given the short shrift the Christians give to their followers in this picture, the invaders seem like a better option but it’s not a film to weigh such matters, The important thing is all the scheming that goes on to unseat Elizabeth from her power and wealth following the death of warrior husband Ferenc (Vincent Regan).

Emblazoned with the rich gothic reds of Hammer Films, there are lots of hacked limbs, rolling heads, dank dungeons, tortured serfs, heaving bodies and bats and rats. “Bathory” is a preposterous romp as it follows Elizabeth through her tempestuous marriage; a love affair with an Italian artist who turns out to be Caravaggio (Hans Matheson); domination by a dubiously spooky healer (Deana Jakubisko-Horbathova); and betrayal by her late husband’s trusted ally (Karl Roden).

English actress Friel looks altogether too petite to dominate the macho men who surround her but she gives it her best shot while grappling with a Transylvanian accent that threatens to strangle her every time she opens her mouth. The testosterone pumps as furiously as the blood on the male side of the cast while the females burst bodices and prepare to become corpses.

Veteran Czech actor Bolek Polivka has fun as an elderly monk spying on the Bathorys on behalf of the church but who spends most of his time inventing helpful machines such as roller skates and parachutes. Those scenes at least seem intended for laughs.