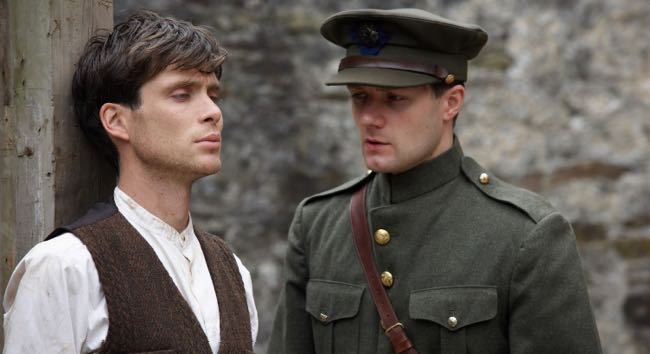 Fancy that, Ken Loach’s Palme d’Or-winning “The Wind That Shakes the Barley,” a drama about the Irish troubles set in the 1920s, opens in New York just in time for St. Patrick’s Day.

The New York Times critic A.O. Scott welcomes it with open arms today, assuring readers that its depiction of history “is as alive and as troubling as anything on the evening news, though far more thoughtful and beautiful.”

It is a handsome and well-crafted film (Barry Ackroyd won the European Film Award for cinematography deservedly) but it’s all too predictable in its tale of two brothers who fight the British and then each other.

I thought when I reviewed the film at the Festival de Cannes last year that its conventional shape, however, might give it more commercial appeal, something Loach’s earnest films often lack.

The film didn’t do very well in its British release last summer but it could reach audiences in the U.S. who prefer their history simple and pretty to look at. There’s a two-disc DVD available in the U.K. from Pathe via 20th Century Fox.

“Barley,” starring Cillian Murphy and Pádraic Delaney (pictured) was the British filmmaker’s eighth film to be selected in competition at Cannes and watching him at the awards ceremony, I thought he was genuinely touched by his first win. He said, “This is a grand honour. Our film is a little step in the British confronting their imperialist history. Maybe if we tell the truth about the past we can tell the truth about the present.”

Jury president Wong Kar Wai declared that the vote had been unanimous.
After the ceremony, Loach told reporters: “We live in extraordinary times, and that has made people political in a way they maybe weren’t in the previous four, five, six years. The wars that we have seen, the occupations that we see throughout the world — people finally cannot turn away from that. It’s very exciting to be able to deal with this in films, and not just be a complement to the popcorn.”

This is how my review begins in The Hollywood Reporter:

CANNES — A Ken Loach film about the British in Ireland always has the potential for controversy, but his historical drama “The Wind That Shakes the Barley” is unlikely to inflame passions on either side.

Atmospheric but pedestrian, it is a retelling of the classic tragedy of all civil wars, from the U.S. to Vietnam to England, where brother is pitched against brother.

The film looks handsomely authentic, and the familiar characters are engaging, but the story is predictable and the Irish accents are so thick that even English subtitles are required. Loach’s humanity is always in evidence, however, and the lack of histrionics will please many, so the film’s conventionality could help make it accessible to general audiences.