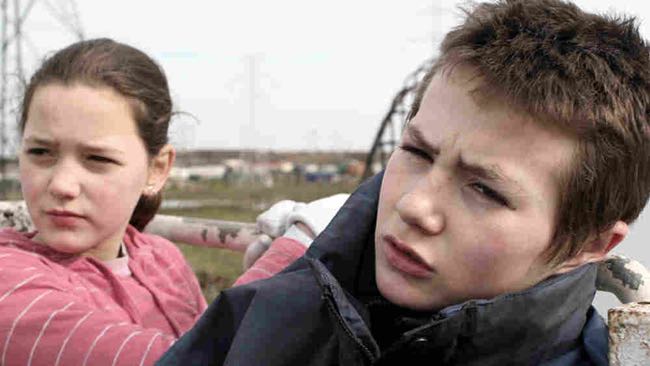 LOCARNO, Switzerland – Two little Irish kids flee their abusive homes on a bleak estate and ride a barge into the center of Dublin for a night of adventure and stark terror in Lance Daly’s captivating feature “Kisses.”

Foul-mouthed and full of life, the two pre-teenagers played memorably by Kelly O’Neill and Shane Curry escape their grim and cheerless environment to find even greater peril on the city’s mean streets. But Daly, who is writer, director and cinematographer, finds warmth and humor in their predicament as the pair discover a trust they’ve never known before.

Named Best Irish Film at this year’s Galway Film Fleadh, “Kisses” will flourish on the festival circuit and could go wider thanks to the gritty and irresistible charm of the youngsters, a lot of Bob Dylan on the soundtrack, and Daly’s gift for insightful storytelling.

The two kids, Dylan (Curry) and Kylie (O’Neill), are neighbors on a soul-destroying housing estate where the girl has a bullying older sister and an abusive uncle, and the boy tries to hide from the constant battling of his parents. When his father punches his mother, Dylan jumps in but then has to run as the man turns on him.

In a well-staged and frightening sequence, the boy races through the house with his father on his heels, making it out onto the street thanks to some quick thinking by his pal Kylie. She grabs some cash from her own home and the pair hotfoot it to the nearby canal.

Hitching a ride from a genial barge-worker, the two kids embark on an odyssey that Dylan hopes will lead him to his older brother who left home years before and is living somewhere in the city. On the way, they encounter some oddball characters, some friendly but others distinctly not. One is a street performer who introduces them to the music of Bob Dylan, and later they meet a Dylan impersonator played by the uncredited Stephen Rea.

Daly catches the spirit of two resourceful kids who have a lot of gumption to go with their grave suspicion of grownups and his two young stars are unforgettable. He paints a wretched picture of Dublin’s seedy underbelly but by keeping his focus on the two remarkable youngsters without an ounce of sentiment he succeeds in making something true and satisfying.