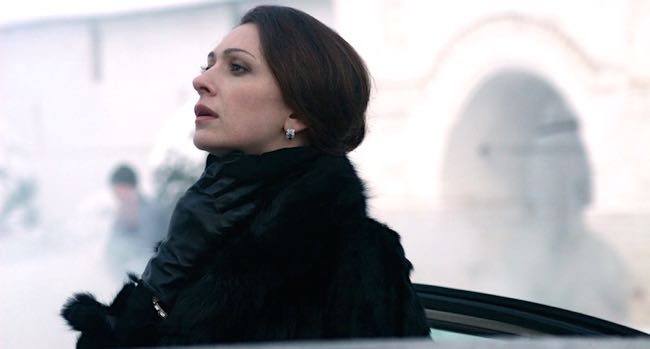 LOCARNO, Switzerland – Reality takes a back seat in Russian director Kirill Serebrennikov’s puzzling fable “Yuri’s Day,” in which an internationally famous opera star abandons everything to become the incarnation of Mother Russia.

Intriguing at first, the beautifully shot film becomes increasingly obscure as it turns into a thoroughly Russian exploration of that country’s restless soul. Serebrennikov celebrates the woman’s abandonment of riches and acclaim, and her return to the most basic and selfless kind of nurturing.

With fascinating locations in a small town deep in the wintry countryside and several intriguing opening sequences, the film appears to be a straightforward suspense film. But Serebrennikov has grander pretensions and while he clearly intends it as a hymn to all things Russian, the picture will leave many confused and let down. Audiences beyond Russia’s borders will be difficult to reach.

It starts out as a simple mystery story as glamorous and supremely confident diva Lyuba (Ksenia Rappoport) takes her complaining son Andrei (Roman Shmakov) to her hometown of Yuriev, which she left 20 years earlier. They explore the local sites but then the young man climbs a bell tower and is not seen again.

The town and its inhabitants reek of times past and as Lyuba rushes about seeking her missing son, she is gradually drawn into their ancient world. A museum cashier takes her in and a local cop comes to her aid but she has entered another time and place, one that perhaps only Russians know.

Rappoport (“La Sconosciuta”) does a fine job as the woman changes from an assured personality to a panicked mother and finally to a compassionate nurse. The scenes of her singing, however, are embarrassingly bad with the director failing to ensure exact lip-synching or a proper sound mix. Those scenes signal the film’s departure into a similarly unconvincing fantasy.