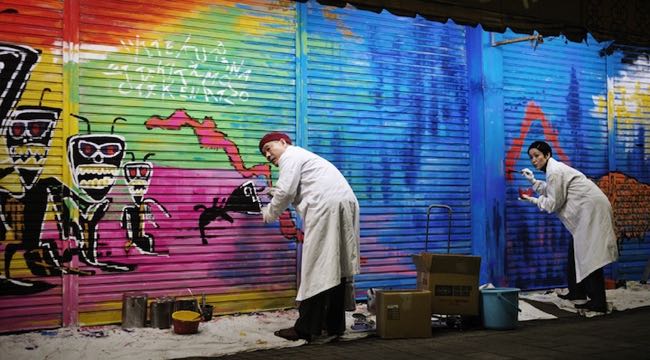 VENICE – In his third film examining the conflicts that arise from being distinctively creative, Japanese filmmaker Takeshi Kitano uses the mathematical paradox of the title “Achilles and the Tortoise” to chase after the true nature of art and doesn’t quite make it.

Kitano takes the Zeno paradox that demonstrates why, mathematically, the speedy runner Achilles can never catch up with the dawdling tortoise, and portrays a compulsive artist always one step in back of his dreams. He keeps it all interesting with much black humor and he makes the point clearly that, like beauty, art is in the eye of the beholder.

It’s an enjoyable, if in the end sentimental, portrait of a man consumed with and driven mad by his passion for art. The film will find admirers at festivals and in art houses, and the trilogy — including “Takeshis’ ” and “Glory to the Filmmaker!” — will be a DVD boxed set guaranteed to be popular with Kitano fans.

Set at three stages in the life of driven artist Machisu Kuamochi, the tale shows him first as a young boy (Reo Yoshioka) whose addiction to making pictures is encouraged by his wealthy father (Akira Nakao), even though he often skips class in order to draw.

Orphaned when his father commits suicide, Machisu follows his artistic drive through periods with stern relatives and in an orphanage. As a young man (Yurei Yanagi), he goes to art school and plunges into outrageous projects with his manic fellow students who push their creative energies to extremes.

In middle age (the director, using his actor’s moniker Beat Takeshi), with the help of his devoted and similarly art-crazed wife, Sachiko (Kanako Higuchi), and to the horror of their conventional daughter, Mari (Eri Tokunaga), he turns to increasingly bizarre techniques to fulfill his artistic vision.

Through all of this, it’s patently clear that despite all his efforts, Machisu’s output is rubbish, as a kindly art dealer constantly observes, and he never sells even one. He blatantly copies such successful artists as Miro, Mondrian and Klee, finds grotesque and hilarious ways to splash paint randomly onto various surfaces and risks life and limb, especially his wife’s, along the way.

The film’s mood changes after a confident first segment that has a memorable performance by Yoshioka as the young boy. The wild art-student days are an uneasy mix of comedy and sudden death, and the final third suffers from a sense of repetition as the failed artist keeps going back to the drawing board.

But it’s shot and acted well, with cinematographer Katsumi Yanagijima and production designer Norihiro Isoda making impressive contributions along with an attractive score by Yuki Kajiura, who uses strings and a solo piano to purposeful effect in contrast to the hapless artistic endeavors depicted onscreen.