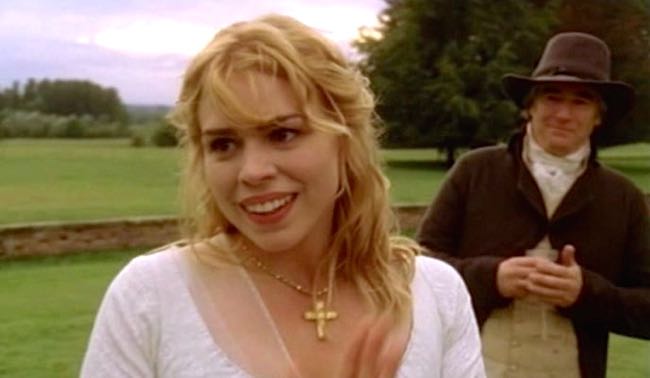 Billie Piper hardly has to prove herself any more as a television actress after “Canterbury Tales,” “Doctor Who” and “The Ruby In the Smoke,” and she’s very good in “Mansfield Park,” which airs on the U.K.’s ITV1 Sunday night.

She brings an appealing sense of mischief to the role of Fanny Price opposite Joseph Beattie as the manipulative Henry Crawford, Joseph Morgan as Fanny’s brother William, and Blake Ritson as Edmund Bertram, the man she loves.

Here’s how my review begins in The Hollywood Reporter.

LONDON — The first in ITV’s high-profile new season of Jane Austen adaptations, “Mansfield Park,” is a disappointingly muted affair in which the 18th century tale of poor Fanny Price and her life with wealthy relations plays out predictably.

Writer Maggie Wadey’s treatment lacks the flair that recent Austen screen outings have displayed and director Iain B. MacDonald sets a pedestrian pace. Still, the acting is fine and so are the costumes and locations.

Austen lovers will be neither outraged nor especially pleased by a production that is merely dull. Billie Piper, though, having abandoned the time travels of “Doctor Who,” makes a believable Fanny with her mouthful of teeth and mischievous eyes.