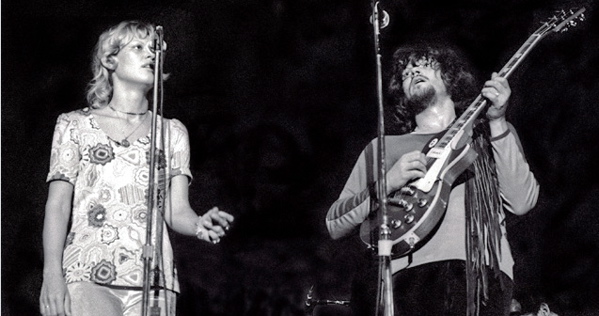 Very sad to hear of the death on Dec. 27 of the great Delaney Bramlett whose recordings with then wife Bonnie (nee Lynn O’Farrell) in the band Delaney & Bonnie were among the most formative of the late ’60s and early ’70s.

I saw them in Detroit back then and tracks on the Rhino compilation are fixtures on my iPod. His great bluesy sound and her unforgettable voice make them indispensable rock ‘n’ roll icons. Here’s Bramlett’s obituary in The Times

For a brief spell in the late 1960s and early 1970s the singer and guitarist Delaney Bramlett led what many regarded as the most influential rock’n’roll band in the world.

Known as Delaney & Bonnie & Friends, the loose conglomeration, led by Bramlett and his wife, toured and recorded with a stellar backing band that included Eric Clapton, George Harrison, Leon Russell, Duane and Greg Allman and Dave Mason of Traffic among other rock luminaries.

A charismatic figure from the US South with a background steeped in blues and gospel music, Bramlett came to be regarded as a mentor by many of his more famous associates. Harrison and Clapton both credited him with putting them back in touch with their roots at a time when the pressures of pop celebrity had caused them to drift from their moorings.

After his famous friends moved on Bramlett’s career — and his marriage — hit the buffers, but his influence has proved more lasting. Fusing more traditional forms such as blues, R&B, gospel and country with contemporary rock, alongside artists such as the Band, he was responsible for a sea change in US popular music in which “authenticity” came to be promoted over Tin Pan Alley froth.

He continued to work in the music business as a producer and writer and, after overcoming battles with a number of personal demons, he returned to recording and released a wellreceived solo album of new material shortly before his death.

Delaney Bramlett was born in Pontotoc, Mississippi, in 1939. He served in the US Navy and on his discharge in 1959 moved to Los Angeles with the intention of making a career in music. He began writing songs and playing sessions and in 1964 joined the Shindogs, the house band on the television show Shindig!, which also featured Leon Russell.

In 1967 he met Bonnie Lynn O’Farrell, a young session singer. They married a year later and, with support from Russell, formed Delaney & Bonnie & Friends. They were signed by the Memphis-based label Stax Records, and their first album, Home, appeared in 1969. Although it sold poorly it brought Delaney’s gritty, Southern-tinged songwriting, singing and guitar-playing to the attention of music business connoisseurs.

After they moved to Elektra Records, the duo’s second album, Accept No Substitute (1969) heightened the buzz, and George Harrison signed Delaney and Bonnie to the Beatles’ Apple Records. Bramlett thanked him by teaching him to play slide guitar — heard to brilliant effect on Harrison’s No 1 single My Sweet Lord — but the Apple deal was swiftly cancelled when Elektra objected that it still had the duo under contract.

Harrison’s support helped to earn the Bramletts a support slot with Blind Faith, at the time one of the biggest groups in the world, on a sellout tour of US stadiums in 1969. Blind Faith’s guitarist, Eric Clapton, who was growing disillusioned with heavy rock, immediately fell in love with Delaney’s more down-home, roots-based style and took to appearing on stage with the duo before his own set.

Concluding that he enjoyed being a low-key member of their backing band far more than the pressures of superstardom in Blind Faith, Clapton broke up the group at the end of the tour and asked to sign on with Delaney and Bonnie as a humble backing musician.

For the next year or so, Bramlett and Clapton became inseparable. The English guitarist moved into Bramlett’s house in Sherman Oaks, Los Angeles and fell so under his spell that in an interview in 2004 he said of him: “Delaney had the aura of a Southern Baptist preacher. I was keen to believe it was something spiritual. I saw him as being some kind of guru I could learn from.”

Freed from their Elektra contract, Clapton helped to get the Bramletts signed to his then US-label, Atco, which released the albumDelaney and Bonnie on Tour with Eric Clapton in 1970. The record’s earthy joy — and the superstar guests who in addition to Clapton also included Harrison and Dave Mason — helped to make it the most commercially successful release of the duo’s career.

At about the same time Bramlett produced Clapton’s 1970 debut album, Eric Clapton, and with the guitarist co-wrote the record’s best song, Let It Rain.

It was the first time that Clapton’s voice had been extensively heard on an album, and he credited Bramlett as the man who persuaded him that he could sing.

When Clapton eventually returned to Britain in 1970, he took the rest of Delaney and Bonnie’s backing band with him and they went on to become Derek and the Dominos. The Bramletts recruited new musicians to their touring band, including for a time Greg and Duane Allman, and recorded the albums To Bonnie from Delaney(1970) and the mostly acoustic Motel Shot (1971).

However, the strains in the couple’s marriage and Bramlett’s heavy drinking and drug abuse were taking a toll on their music. The couple’s next album was rejected as substandard by Atco, and their contract was sold on to Columbia, which released the record in 1972 as D&B Together — that title proved to be heavy with irony because it was their last album as husband and wife, and they divorced the following year.

Bramlett’s career as a solo artist never really took off although he continued to work, producing albums for blues and gospel artists such as Etta James and the Staple Singers and sporadically releasing albums of his own. He most recently returned to the studio in 2008, after a six-year absence, to record the album A New Kind of Blues.

Bramlett is survived by his second wife, Susan, three daughters, including the singer Bekka Bramlett, and a son.