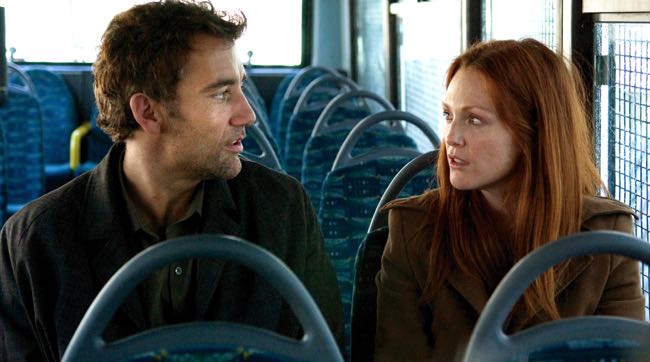 For some reason, Metacritic read my review of “Children of Men” from the Venice International Film Festival last fall and concluded I gave it an 80% rating. In fact, I ranked Alfonso Cuaron’s extraordinary film along with Alejandro González Iñárritu’s “Babel” and Guillermo del Toro’s “Pan’s Labyrinth” (El Laberinto del fauno) as the Top 3 movies of 2006.

Emmanuel Lubezki richly deserved his prizes for best cinematography from BAFTA and the American Society of Cinematographers, and likewise Geoffrey Kirkland, Jim Clay, Jennifer Williams for their BAFTA award for best production design. But the film warranted far more accolades than that.

Today, Universal releases a two-disc special edition DVD of “Children of Men”, which stars Clive Owen and Julianne Moore (pictured) and Michael Caine, with bonus features that include Cuaron’s documentary “The Possibility of Hope” expanding on themes from the film.

My friend Glenn Abel reports on his terrific DVD Spin Doctor site (see Play it, Sam at right) that Universal will release the DVD in the United States on March 27. He also says that the “Pan’s Labyrinth” DVD is due in the U.S. from New Line on May 15.

While all the technical achievements of “Children of Men” are top class, Owen’s intelligent and nuanced performance as the reluctant hero should not be overlooked. Owen has turned in some excellent performances since Mike Hodges’s memorable 1998 picture “Croupier” helped break him into the big-time, and this is one of his best.

It will be long remembered while a good number of much-praised films from last year, such as Martin Scorsese’s rank “The Departed,” are forgotten. I continue to campaign for Hodges’ marvelously evocative crime film “I’ll Sleep When I”m Dead,” in which Owen also stars. It remains one of the great undiscovered gangster films.

Read my review on this site of “Children of Men”