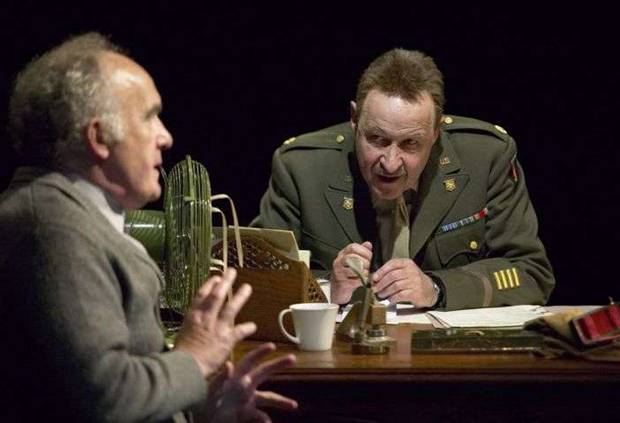 LONDON – British playwright Ronald Harwood’s 1995 play “Taking Sides” and his latest, “Collaboration,” presented in tandem at the Duchess Theatre in London’s West End, each deal with people trapped in the quagmire of Nazi Germany and challenge viewers to wonder, “What would you have done?”

Both productions are directed with great skill by Philip Franks and star the same accomplished players as Michael Pennington and David Horovitch  portray excellently very different antagonists from one play to the next.

The plays can be viewed separately but seeing the productions as a double bill reinforces Harwood’s trenchant examination of one the tragedies of that time and the predicament into which artists in particular were thrust.

“Taking Sides” takes place during the post-World War II de-Nazification when German citizens were investigated regarding their compromises and affiliations during Hitler’s regime. An abrasive U.S. officer, Major Arnold (Horovitch) is grilling famous conductor Dr. Wilhelm Furtwangler (Pennington) about his time as leader of the Berlin Philharmonic during the Third Reich.

Pennington conveys the conductor’s anguish and crumpled dignity while Horovitch helps Harwood heighten the dilemma by making the interrogator vulgar and unlikable.

“Collaboration” deals with composer Richard Strauss (Pennington) and his reaction to being told by Hitler’s thugs that he can no longer work with his great librettist, Stefan Zweig (Horovitch) because he is Jewish.

The two leading actors almost change shape as well as character and the play is enriched by fine contributions from Isla Blair as Strauss’ formidable wife and Martin Hutson as a Nazi officer.

Harwood, who won the Academy Award for writing “The Piano” in 2002 and the BAFTA for “The Diving Bell and the Butterfly” in 2007, blends his gift for imagery with fine stagecraft.

“Taking Sides” and “Collaboration” offer no solutions to the moral dilemmas examined, they do impart considerable wisdom.