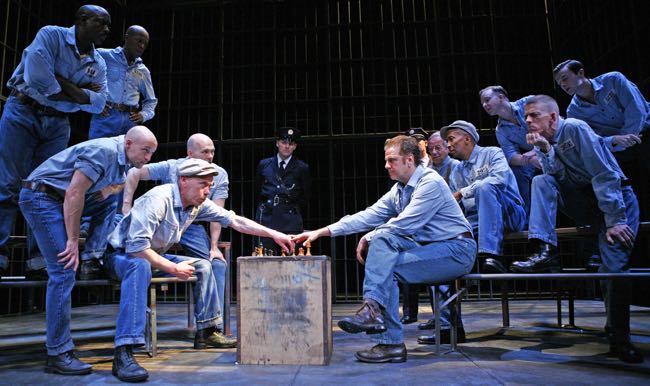 LONDON – Fashioned more to take advantage of the enduring popularity of the 1994 movie, the stage version of “The Shawshank Redemption”, which moved to the West End following a good run in Dublin, succeeds as entertainment but adds little by way of artistic achievement.

Based on Stephen King’s short novel rather than the film’s script, the production nonetheless features a black actor, Reg E. Cathey as Red, the lifer who befriends wrongly conflicted Andy Dufresne (Kevin Anderson) in the grim cells of Shawshank.

Confined to the prison, made claustrophobic by designer Ferdia Murphy’s set of massive steel bars, the play follows the storyline that pits Dufresne against aggressive convicts, brutal guards and a corrupt warden. With full-frontal nudity and graphic depictions of gang rape, it’s not all easygoing but a measure of its ambitions was reflected during the curtain call on opening night when the bad guys were booed like pantomime villains.

The chorus, as it were, of prisoners divides into good guys who pal around with Red and bad guys led by Joe Hanley, who does a good job of acting depraved. Mitchell Mullen is smoothly sinister as the immoral prison warden.

Best of all is veteran British actor Geoffrey Hutchings as Brooksie, the lifer who runs the prison library and who was portrayed by James Whitmore in the film. Hutchings manifests the oldtimer’s recognition, faced with parole, that he is no longer fit for everyday life beyond prison bars but also shows that the character has a mean streak that explains why he was sent there in the first place.