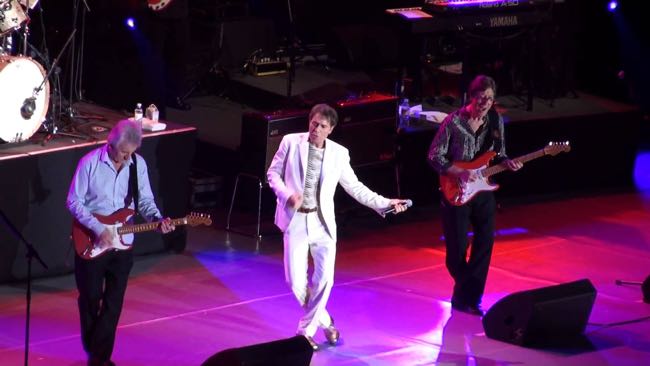 LONDON – It seemed like a good idea to catch Britain’s evergreen pop star Cliff Richard as he kicked off his big 50th anniversary reunion tour with his original band the Shadows, who went separate ways 20 years ago. But as Simone Signoret famously said, nostalgia ain’t what it used to be.

I was a kid in England when Richard was among the crop of embarrassing British singers trying their best to emulate Elvis, Gene Vincent, Eddie Cochran and the rest. With names like Billy Fury, Marty Wilde and Vince Eager, they gyrated onto the BBC with lame cover versions of U.S. hits and rinky-dink originals from London’s fiercely anti-rock Tin Pan Alley.

Richard and the Shadows at least wrote their own material, but hearing it all repeated with soulless efficiency in their O2 Arena on concert Monday brought back those dog days when Elvis seemed so far away and the Beatles, Kinks and Stones hadn’t arrived yet.

Extremely well-preserved physically, Richard and the two leading Shadows, Hank Marvin and Bruce Welch, looked immaculate in their polished attire and did their unctuous best to please but resembled the resident Stepford Band in the way they performed.

Richard sings in tune but with no character in his voice, and the songs are trite and repetitive, lacking wit, emotion or passion. The guitar players delivered their narcoleptic chords while taking two somnolent steps forward, two steps back.

They played all the hits that have long pleased their fans in the U.K., Australia and Europe but almost never in the United States, and the sold-out auditorium was filled with happy smiling people.

It’s odd that the crowd at the Led Zeppelin reunion looked pretty much the same, all white hair and wrinkly, but were so very, very different.