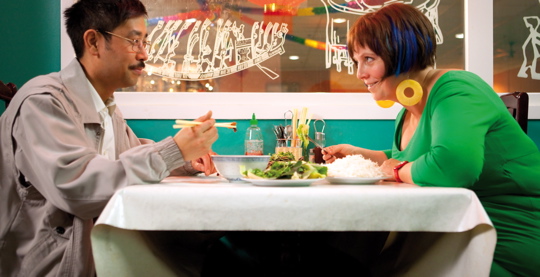 BERLIN – The difficulty with Doris Dorrie’s jolly and colorful romp “The Hairdresser” is that when the fat lady sings it still ain’t over. She doesn’t so much sing, really, as chirp, but she keeps on chirping relentlessly until you wish she’d just eat a wafer-thin mint and explode like Monty Python’s Mr. Creosote.

But that’s just me. Several at the packed press screening found considerable mirth in the considerable girth of star Gabriela Maria Schmeide. It might be that there’s an audience waiting to applaud a woman whose complete denial of any potential health fears from being massively obese comes with a very appealing grin. Women of a certain size, and not a few men, might eat it up like a double helping of ice cream.

Schmeide plays a morbidly overweight woman named Kathy whose indomitable spirit the film celebrates even as she has to pause at length climbing the stairs to her apartment, requires a rope to haul herself out of bed, and needs the assistance of a stranger in the metro to unzip the back of her dress because she won’t be able to reach it when she gets home.

Oh, and her husband has left her, she’s a single parent, she doesn’t have a job, and she has multiple sclerosis. But none of that puts a dent in Kathy’s determination to be the best hairdresser in Berlin, and the film follows her as she strives to follow her dream even if it involves smuggling Vietnamese immigrants across the border from Poland. What?

Screenwriter Laila Stieler finds it highly amusing to have an extremely obese woman taking care of a dozen or so Asian immigrants in her cramped apartment. Not only that, but one of them, a genial chap named Tien (Ill-Young Kim) takes distinct fancy to Kathy’s monumental curves. There’s a fairly explicit scene in which skinny Tien not so much makes love to the naked Kathy as gets in amongst her.

Schmeide throws herself into everything with cheerful abandon. We get to see Kathy from the back and below as she clambers naked out of bed, Kathy naked in the bathtub and Kathy lifting major parts of her naked body in order to slather on skin cream. Some will find this diverting, others not.