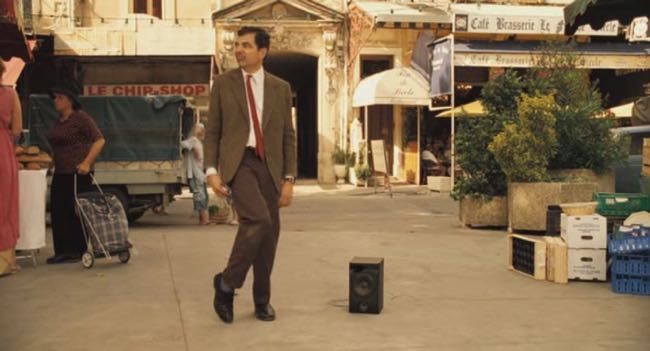 Unlike the French classic, however, the new picture has plenty of chuckles but few outright laughs as Bean wins a raffle ticket for a vacation in the south of France but loses his way causing minor havoc roaming the countryside.

The picture is released across the U.K. and most of Europe this weekend but not until Aug. 31 in the United States.

Atkinson remains an expert clown and there are sufficient numbers of gags to ensure that Bean fans around the world will be kept fairly happy. It’s difficult to see the film doing blockbuster business but it will inevitably have a long DVD shelf life.

The screenplay by British TV writer Hamish McColl and Bean regular Robin Driscoll wastes little time in getting the fussy hero with his ever-present digital movie camera onto the Eurostar headed for Paris.

The French fare better in this film than Americans did in “Bean” 10 years ago, as it’s clear that Bean himself is the idiot. Unable to speak the language and not willing to learn, he is equally incapable of even the basic tourist sign language. He cannot order food in a restaurant, find the right train or make a phone call.

As a result, there’s little by way of satire and the jokes depend on Bean’s stupidity. This involves such things as ingesting langoustine whole and pitching fresh oysters into his napkin that he then tips into a woman’s handbag.

At the Gare de Lyon, Bean’s determination to record his trip on video involves a genial fellow who happens to be a Russian film director named Emil (Karel Roden) on his way to the Festival de Cannes. Accidentally leaving Emil stuck on the platform, Bean hooks up with the director’s resourceful son Stepan (Max Baldry) as the train heads south.

Bean contrives to miss the train himself at another stop but somehow finds Stepan again little knowing that the boy’s father has reported him kidnapped. It doesn’t help matters that Bean has lost his wallet, tickets and passport.

Along the way, Bean encounters a group of filmmakers including egomaniac Carson Clay (Willem Dafore) and a friendly young actress Sabine (Emma de Caunes). Soon they all find themselves heading for Cannes and a climax at the premiere of Clay’s pretentious new film to which Bean makes an unexpected contribution.

Atkinson is given several set pieces in which director Steve Bendelack, a British TV veteran, pretty much lets him get on with it. These include the lengthy restaurant sequence that is squishy enough to please youngsters; an empty-road scene that draws from “North By Northwest” and “Lawrence of Arabia” without turning into anything especially amusing; and a clever bit in which Bean manages to stride straight out from the top of the Palais des Festivals in Cannes to the beach without missing a step.

Baudry and de Caunes are appealing as Bean’s foils although Dafoe appears to think he’s in a pantomime and hams up a storm. Atkinson reportedly says this is Bean’s last outing and while it is amusing, it is disappointing that he appears content to play it safe. It would have been fun to see him aim higher.