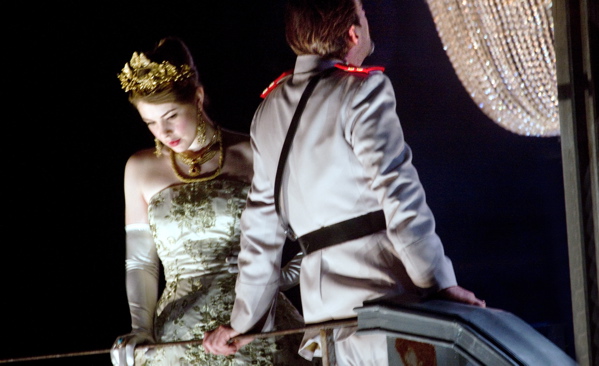 LONDON – Pretty much everyone dies at the end of Thomas Middleton’s steamy la dolce vita roundelay “Women Beware Women,” and in the National’s new production of the Jacobean classic, it happens in a magnificently designed tableau of stabbings, poisonings, murder and suicide.

Set designer Lez Brotherston uses the Olivier stage’s full size for a multi-story edifice that revolves as the carnage engulfs most of the players at the climax of a saga of lust and greed fueled by both ambition and callous indifference.

Written in 1622 and set in Florence where the Duke (Richard Lintern) rules through cunning, terror and brutal power, it is a tale of a male-dominated world in which smart women might plot and connive but are doomed to suffer the consequences of misogynistic traditions and rules.

The clothes are modern and the music (by Olly Fox) is seductive jazz, but the language is full of “thee” and “thy” and the claustrophobic environment of the Duke’s court is right from the era of James I.

The play follows the fate of two beautiful young women, Bianca (Lauren O’Neil) and Isabella (Vanessa Kirby) and the way they are mistreated by the men in their lives whose wicked designs are enabled by the conniving rich widow Livia (Harriet Walter).

Having buried two husbands, Livia spends her time doting on her two brothers and is happy to conspire toward their satisfaction even if it means the two young women are plunged into a world of decadence and degradation.

Director Marianne Elliott, whose credits include staging the massive life-sized puppetry of “War Horse,” strives for a modern sensibility with the play and makes the most of important scenes involving a duplicitous game of chess and a lavish banquet as well as the concluding murderous ballet.

Walter manages to make Livia sound more shrewd than sinister as she confesses, “Oh, the deadly snares that women set for women, without pity either to soul or honor!” Her own downfall in letting a man once again get under her skin is played with sympathetic vulnerability.

O’Neil and Kirby are clever in showing the steel emerging after their radiant early appearances with O’Neil conveying a mix of toughness and regret as Bianca while Kirby’s Isabella, thinking her fate resolved in her favor, is playful and sexy in toying with an idiot suitor.

It’s great that the National is around to revive such classics and this is fully worth seeing. And at the end, there’s a cautionary note. The last man standing is a pious Cardinal (Chu Omambala) who, when the sinful ruler dies, observes, “So where lust reigns, that prince cannot reign long.”