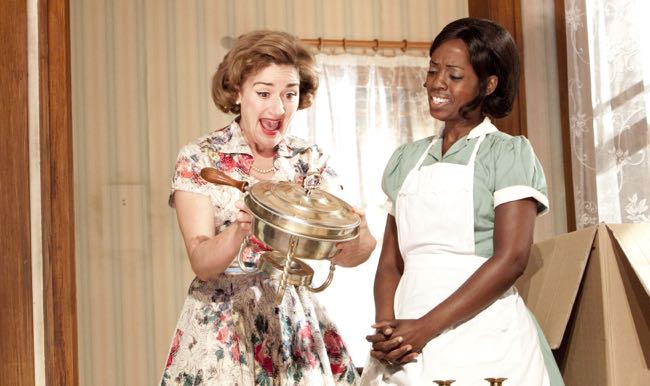 LONDON – Race relations in a Chicago suburb in 1959 and 50 years later take a savage but hilarious beating in the Royal Court’s “Clybourne Park” by Bruce Norris, now transferred to the West End.

In 1959, the residents’ association in a fictional all-white community becomes alarmed when a black couple want to buy a home there. In 2009, the area has long been a thriving black community and now a white couple aim to move into that same house.

Observant, insightful and outrageously funny, Norris turns racial attitudes upside down to explore if they have changed over the decades or if racism will never go away. The play has no easy answers but the conflicts involved certainly shine a bright light on the topic. On Robert Innes Hopkins’ evocative set, which changes from a comfortable home to a ruined hulk, director Dominic Cooke shepherds a talented cast with absolute precision.

Openly influenced by the 1959 Lorraine Hansberry play “A Raisin in the Sun”, the production starts in the home of a comfortable middle-aged, middle-class white couple whose American dream has turned sour. Russ (Stuart McQuarrie) and Bev (Sophie Thompson) grieve the loss of their soldier son in different ways: the father unsociable and filled with barely suppressed anger, the mother with fussy housekeeping and determined good cheer.

Bev is kind, if patronising, to her black maid Francine (Lorna Brown, pictured with Sophie Thompson) but unaware that she is married with three children until husband Albert (Lucian Msamati) picks her up one day. The two happen to be there when neighbor Karl (Stephen Campbell Moore) and his pregnant wife Betsy (Sarah Goldberg) show up to try to talk Russ out of selling the house to a black couple.

In the second act, Brown and Msamati play members of the current residents’ association who are keen to make sure that prospective homeowners Steve (Moore) and pregnant Lindsey (Goldberg) don’t harm the neighborhood’s cultural heritage with their rebuilding plans.

Norris uses contrasting techniques for each sequence. The first part is more theatrical with Russ and Bev packing up to move home when the unwelcome persuaders show up. McQuarrie explodes in a remarkable show of fury when what happened to their son is revealed while Thompson channels every chirrupy mother from 1950s sitcoms. Bev’s misguidedly charitable attempts to give an unwanted chafing dish to Francine despite the maid’s determined indifference typify the play’s subtlety.

Moore succeeds in showing Karl’s financially inspired racism even as the man attempts to become more reasonable, another successful Norris device. It’s an ensemble show, however, with all of the players in top form. In the second act, Brown shows exactly how to stop a conversation with a single snap of the neck and an eyes-wide glare.

The second part is really just six people who sit around having an argument, but it works because of the crackerjack exchanges that escalate, or rather descend, into an open discussion of the conflicts at hand. Norris uses two old and completely scurrilous and obscene jokes to illustrate hilariously where intolerance leads.

A massive hit at the Royal Court, the play is in line for awards and a long run with its clever mix of human fallibility and the apparently relentless self-interest of every part of society.