FILM REVIEW: ‘The Lives of Others’ 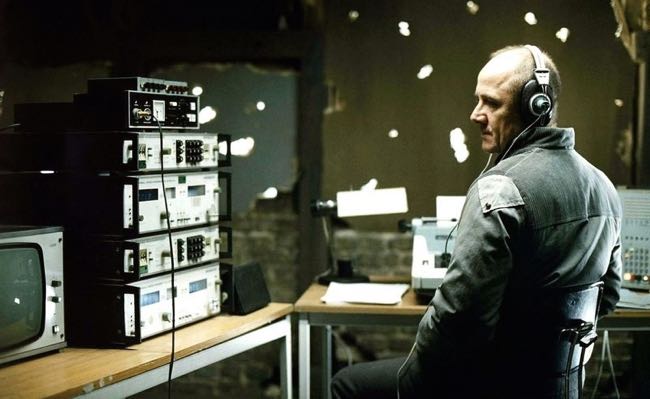 The McGuffin in Florian Henckel von Donnersmarck’s vastly overrated film about state repression, “The Lives of Others,” which opens in the U.K. on April 13, is a manual typewriter with a red ribbon. Just the thing you would choose if you were writing subversive reports about a cruel regime that bugs your home, films your every move and compromises the ones you love in order to trap you.

The machine is hidden beneath the floorboards in the apartment of a playwright named Georg Dreyman (Sebastian Koch) in East Berlin before the Wall came down. He uses it secretly to write reports about the evils of the obtuse but relentless state police, the Stasi, which are smuggled to the West for publication. The existence of the typewriter becomes the focus of an intense investigation by the Stasi that leads to betrayal, ruin and death.

The whole tension of the film comes to rest on the typewriter but it beggars belief as the screenplay establishes that the playwright famously writes in longhand and has someone transcribe his plays. As the entire weight of a corrupt and insidious political apparatus bears down on Dreyman, his unfortunate lover and his friends, you wonder if he wishes he’d just used his pen.

That’s not the only problem with the film, however. Perhaps the ugliness of East German repression is news to the folks who lived there, and airing it is a good thing. But it’s nothing new for those of us in the West who have been reading historians and novelists such as Len Deighton and John Gardner on the subject for decades.

Director and screenwriter Von Donnersmarck’s film is well acted, especially by Koch, Ulrich Muehe (pictured), as the most obsessive Stasi operative, and Martina Gedeck as Dreyman’s lover. But it has the dull grey look of a poor TV movie and what tension there is dissipates as chapters are tacked on at the end. The story’s resolution reflects sensitivity to viewers wishing to be comforted in their living rooms. It suffers from a wish to offer healing. The film cowers in the end instead of raging.

I’m in the minority on this as most critics raved about “The Lives of Others” and it picked up several prizes including the Academy Award for best foreign-language film. I find that baffling when the direct Oscar competition included cinematic treasures such as “Pan’s Labyrinth” and “Days of Glory,” not to mention those without nominations including “Volver,” “Letters from Iwo Jima” and “Apocalypto.”

This entry was posted in Comment, Film and tagged 'The Lives of Others', Florian Henckel von Donnersmarck, Martina Gedeck, Sebastian Koch, Ulrich Muehe. Bookmark the permalink.