FILM REVIEW: ‘Pirates of the Caribbean: On Stranger Tides’ 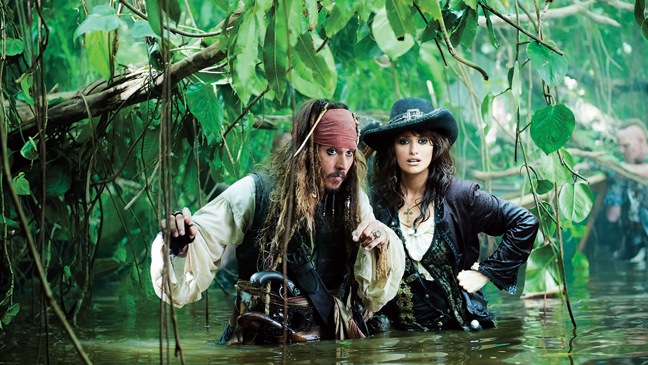 Johnny Depp and Penelope Cruz in ‘Pirates of the Caribbean: On Stranger Tides’

LONDON – Johnny Depp as Captain Jack Sparrow is back in excellent form for his fourth adventure in Pirates of the Caribbean: On Stranger Tides, which is more serious in the hands of a new director, Rob Marshall, and thanks to Penelope Cruz it’s also a good deal sexier.

Best known for musicals such as Nine and the Academy Award-winning Chicago, Marshall shows terrific flair with all the usual chases and sword fights, and he handles the 3D well. He also adds a dash of pepper with lively sexual tension between Sparrow and a Spanish firecracker named Angelica (Cruz).

Angelica is Jack’s match for swordplay and sexy banter, and while the tone of the film, which deals with a search for the fountain of youth, is darker than the three directed by Gore Verbinski, its action, adventure and comedy will see it find a similar pot of theatrical gold.

More of the story takes place on dry land than the other films with inventive and exciting set pieces in London and the hills and jungles of an exotic place where lies the secret of perpetual youth.

It begins with Jack in the British capital to find a way to release from prison his stalwart sailmate Gibbs (Kevin McNally). With inspiration from a novel by Tim Powers titled On Stranger Tides, about another captain named Jack, screenwriters Ted Elliott and Terry Rossio show typical ingenuity in devising hair-raising obstacles for Jack to overcome. In the opening, this involves changing the course of justice in an English court, an encounter with the king in his palace and a riotous chase through the streets of London.

The series’ regular cinematographer, Dariusz Wolski, captures the cityscapes wittily and makes the most of real locations from the city center to the venerable naval museum at Greenwich. Marshall has brought in his usual production designer, John Myhre, who won an Oscar for Chicago, and he makes the palaces, pubs and, later, jungle temple breathtakingly shipshape. Hans Zimmer demonstrates again his keen grasp of how a musical score can inform action and elevate mood and tension.

The plot is again driven by a search for something virtually unobtainable as Jack finds himself in a chase to find the fountain of youth in competition with not only the returning Captain Barbossa (Geoffrey Rush, having fun once more) but also the Spanish navy and the most deadly pirate of them all, Blackbeard (Ian McShane).

Cruz makes a splendid entrance in disguise but once revealed she brings her Oscar-winning vivacity to an irrepressible woman who claims to be Blackbeard’s daughter. McShane, too, grabs his first appearance on the bridge of a pirate ship with great panache.

No less would be expected of Rolling Stone Keith Richards, who has a killer line as Jack’s indomitable pirate father when his son asks him whether he’s ever seen the fountain of youth. It feeds cleverly on the Richards legend and will become one of the most-quoted lines from the series.

The film makes an adventurous departure from the traditionally benign view about mermaids. A mermaid’s tear is a vital ingredient of the potion required for the secret of youth and so Blackbeard schemes to ensnare a school of them in nets on an island beach. They turn out to have more in common with one of Davy Jones’ underwater beasts, save one played by sweet-looking Astrid Berges-Frisbey, who falls for an idealistic cleric played by Sam Claflin. The missionary gives Jack fodder for an amusing line, but also puts religious faith in a good light compared to the Spanish Catholics, whose inquisitional devotion makes them the bad guys.

Marshall and his team make good use of 3D in the exterior sequences so that London landmarks and rocky islands look magnificent. It is less successful when CGI is involved, however, as characters sometimes appear to be cut out figures.

At 136 minutes, the film is marginally the shortest in the series and it profits from that. Cruz is a wonderful addition and a teaser following the credits augers well for more so long as Depp continues to get as much enjoyment from playing the role as he gives to his audience.