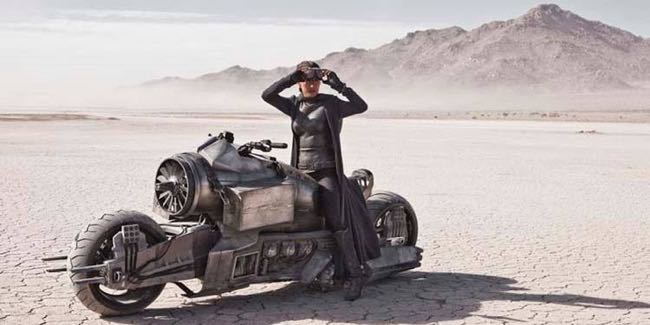 LONDON — “Priest”, directed by Scott Stewart, is a short, dour and stodgy creature feature with average 3D effects that draws on so many film influences from westerns, action adventures and sci-fi tales that what fun there is comes from spotting the many sources.

Set in some nameless apocalyptic past or future it’s a vicars-versus-vampires yarn that aside from a short animated scene setter at the start and the long credits crawl at the end lasts for about 80 minutes. Lacking marquee names and much in the way of thrills, it’s unlikely to linger very long at the local multiplex and the blatant set up for a sequel after the climactic battle appears almost pitiable.

The animated sequence establishes that mankind has retreated within the giant walls of vile, polluted cities after innumerable battles with their vampire enemies, who are now confined to hideous underground camps a long way away.

All that corporal mortification in “The Da Vinci Code” was apparently not enough for Paul Bettany (pictured below). He has the title role of another venomous cleric known only as Priest, who this time has been put out to pasture by the church that rules with an iron fist over what’s left of humankind.

Two sequences set up what will follow in a rag-tag script by Cory Goodman. One has elements of Indiana Jones as a band of soldier-preachers run into a trap set by vampires in an underground maze and Priest fails to save his best mate (Karl Urban), who falls into the clutches of thirsty beasts.

The other has a Western touch as crazed attackers invade a solitary home far out in the wasteland, leave the Priest’s brother and his wife for dead and kidnap their daughter Lucy (Lily Collins). Back in the “Blade Runner” city on a very bad day, Priest tells the church elders that he wants his badge back to he can go rescue Lucy. As a droll but insistent Monsignor, Christopher Plummer orders him not go anywhere as Christopher Young’s choral score starts to soar.

The Priest promptly leaves on a souped up motorcycle and teams with a local lawman, Hicks (Cam Gigandet) to seek the girl. Now it’s “The Searchers” as the embittered older man learns that Hicks is in love with Lucy but has to make it clear that if she has been bitten by the vampires then he will have to kill her.

Monsignor sends a team of priests led by Priestess (Maggie Q, pictured top) to hunt down Priest, but she’s really on the renegade’s side, so now the three of them track the vampires to some kind of mountain that’s shaped like a bee-hive and is in fact called a hive. Inside there’s a large bouncy creature with nasty habits and no face but teeth like the creature from “Aliens”.

Inevitably, Priest’s lost friend shows up, the world’s first human vampire known as Black Hat and looking for all the world like a man with no name except that his eye teeth come to exceptional points. Turns out he likes railway trains and he plans to transport a new army of vampires on a vast train to attack the city and he kidnapped Lucy just to lure Priest out so he could kill him.

Priest, Priestess and Hick must stop the train before the villains can do any harm and now the references come thick and fast. “Once Upon a Time In the West” competes with Mad Max’s “Road Warrior” as Priest and Black Hat fight it out on top of the train while Hicks stumbles along in carriages filled with pods like the ones in “Invasion of the Body Snatchers”.