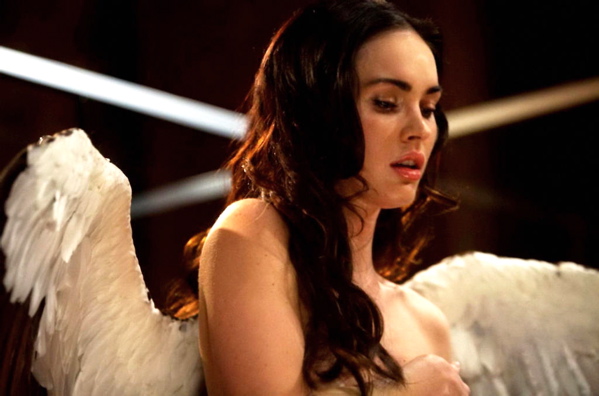 Rourke in “The Wrestler” mode plays a washed-up horn player at odds with a buttoned-down but very dangerous hoodlum named Happy Shannon played by Bill Murray at his most deadpan. Megan Fox is the angel flying too close to the ground who comes between them.

If the degree of laughter at the wrong moments and the number of walkouts at the Toronto International Film Festival are any indication, the film will appeal only to the most fondly indulgent.

Fans of the genre will know where the film is going the minute Nate (Rourke) is driven to a remote place next to a river by a bad man with a gun to be punished for sleeping with the boss’ wife.

A red-tail hawk fills the screen and bullets fly but they hit the bad guy. Nate staggers through the brush and stumbles upon a carnival run by flamboyant carny boss Sam Adamo (Rhys Ifans in full voice).

There, he meets a beautiful young woman named Annie (Fox) whose abundant charms extend to a genuine pair of wings. At this point, those who don’t get it will likely begin to snigger, as many did in the press and industry audience at the Toronto.

Smitten instantly, Nate frees Annie from Adamo’s exploitive clutches but no sooner are they back in the city than he’s trying to make a deal with Happy Shannon over rights to Annie’s potential income as a gorgeous woman with wings.

The inevitable falling out leads to a tussle over the woman and along the way Rourke gets to mime an extraordinarily unconvincing scene of Nate’s trumpet playing, and Fox disrobes attractively.

Rourke’s rumpled hard-man vulnerability is part of his charm and fans will enjoy his work, as will those who enjoy Murray’s ineffably cool line readings. Fox is persuasively shy and hurt, using a soft and whispery voice.

Best of all, there is a terrific song soundtrack assembled by music supervisor Randall Poster including tracks by Little Jimmy Scott, Solomon Burke, Allen Tousaint, and Billy Swan’s marvelous slow version of the Elvis classic “Don’t Be Cruel” heard in full.