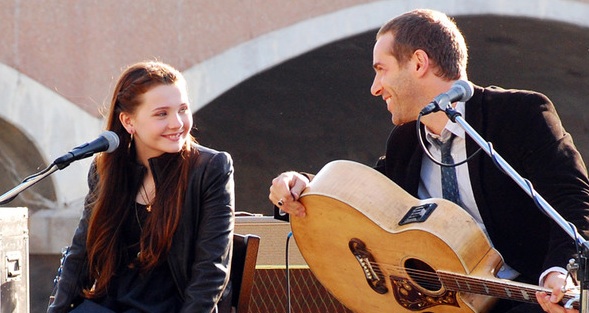 TORONTO – An earnest tale about a faded rock star who discovers he has a teenaged daughter and takes her on the road, “Janie Jones” follows a predictable path and despite decent performances it does not catch fire.

The film’s original songs are low key, the storytelling lacks any kind of vivid insights into life on the road that have not been seen before, and the outcome is signposted clearly. The production is more a promise of what the filmmaker and performers might have to offer in the future that anything likely to make a mark with audiences.

Written and directed by David M. Rosenthal (“Falling Up) the semi-autobiographic story shows drunken has-been Ethan Brand (Alessandro Nivola) playing ramshackle gigs in low-rent halls with a quarrelsome band. One night, a frazzled blonde, Mary-Anne (Elisabeth Shue), shows up in a red convertible and introduces him to a teenager named Janie (Abigail Breslin) she says is his daughter.

Mary-Anne promptly splits and Ethan’s early resistance to taking on the responsibility of being a father soon crumbles. Not surprisingly, Janie turns out to be a talented singer songwriter and before long the two of them are on the road together. When Ethan skids even more out of control, it’s up to Janie to find the path to salvation.

Rosenthal’s setting is credible and Nivola (“Coco Before Chanel”) has all the grizzled charm and arrogance of a rock star as he banters and battles with the boys in the band. Shue’s role is more of a cameo at beginning and end, but she makes a striking entrance all strung out and desperate, as Janie tells her: “You don’t have to dress like a hooker to introduce me.”

Rosenthal says he fathered a child when he was 18 and did not meet her until she was 11 and perhaps the closeness of the story has tempered his filmmaking instincts so the outcome is lackluster. The framework of the picture and the solid performances suggest he has a lot more to offer.

Much of the appeal of the film rests on Breslin (“Little Miss Sunshine”) and she shows spirit and singing ability in some rowdy and occasionally tender scenes. The film presents a sturdy peg for her ongoing growth as a film actor and while it’s not likely to be a highlight in her career, it’s no shame either.