LOCARNO FILM REVIEW: “Beyond the Steppes”

LOCARNO, Switzerland: Belgian filmmaker Vanja d’Alcantara’s “Beyond the Steppes” is a gripping and sometimes harrowing story of a mother’s determination to keep herself and her infant child alive despite brutal hardship.

The film is set in Poland and the Soviet Union in 1940 before Hitler invaded Russia and it uses the languages of those countries. Polish actress Agnieszka Grochowska gives a riveting performance as Nina, one of many women taken from their homeland to the Asian wilds of the USSR and forced into pointless hard labor.

Filmed on the vast empty steppes of Kazakhstan, it’s a story of one woman’s struggle to survive, and the combination of unsentimental storytelling, the bleak but beautiful landscape, and Grochowska’s searing portrayal should see it attract attention at art houses and festivals. 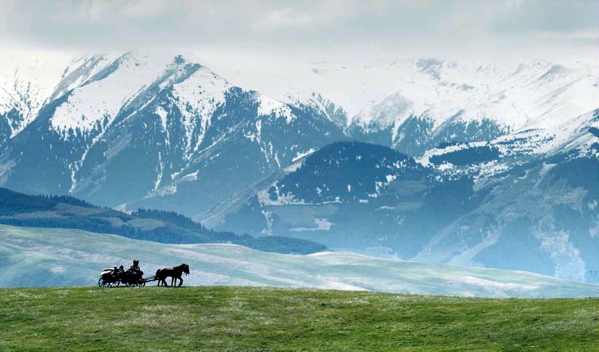 Slim but steely with eyes that can alternately soften and rage, the actress presents a wholly sympathetic portrait of a mother wrenched from a loving home and cast out into the hands of pigs with guns in a pitiless environment.

The writer and director based the story on the experience of her grandmother and she presents it with passion but without sentiment. The picture opens with scenes of domestic bliss in which Nina and her Polish Army officer husband Roman (Borys Szyc) share the joy of new parenthood and a loving relationship.

But Roman and his fellows are soon off to war and Russian soldiers burst into Polish homes to carry away their women and children.

A forced march leads Nina to a desolate camp where the women are made to do backbreaking work all day digging rocks and clearing trenches. When after several months Nina’s son gets dysentery she draws on every resource to obtain medicine to save him. The harsh and lazy Russian soldiers have no sympathy and only when Nina gets help from a Kazakhstan family does she find a reason for optimism.

Shot on the digital Red Cam, the images captured by cinematographer Ruben Impens are stark but impressive. It’s a grim tale with little redemption that will haunt viewers, not least because of the power of Grochowska’s performance.