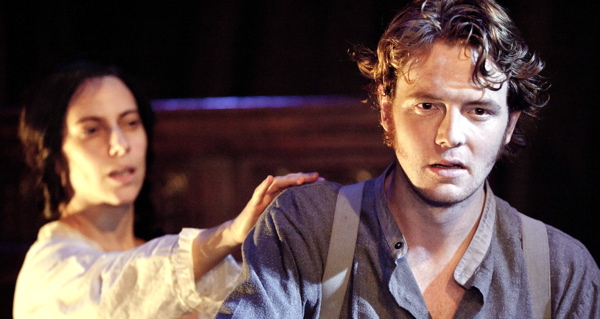 LONDON – That love never fails is a simple concept made rich and complex in Stephen Sondheim’s ardent 1994 Tony Award-winning musical “Passion” in a memorable new production at the Donmar Warehouse.

From the sizzling opening bedroom scene – in which Scarlett Strallen, as blonde temptress Clara, and David Thaxton, as lovesick soldier Giorgio, get more entangled than their sheets – to the tale’s tragic end, it’s a dark and caustic masterpiece.

The simplicity is in the tale of a young man separated from his adored mistress and then becomes the single-minded object of devotion of a plain and sickly woman who will not accept “no” for an answer. The complexity is in Sondheim’s intense score with lyrics that leave aside his usual sophisticated wit to focus on the sharp end of love’s relentless purpose.

The production is made unforgettable by the casting of Argentine star Elena Roger as the dour and haunted Fosca, whose abrupt and overwhelming love for Giorgio is unconditional and brooks no resistance. Roger won acclaim in the West End in a revival of “Evita” and at the Donmar in “Piaf,” and now she has a trio of musical successes.

She is slight and tiny but her voice has a massive range that she draws on without apparent effort so that it bites fiercely when Fosca first declares her undying passion and floats delicately when love finds its way.

The setting is Italy in the 1860s with the gorgeous Clara – sung and acted with beautiful clarity by Strallen – happy to leave husband and child at home to romp with Giorgio in Milan. When he is posted to a remote outpost, they exchange love letters that each reads in superlative staging by director Jamie Lloyd.

Clara emerges on the dining table at the army outpost, dressed in bedclothes to describe her ardour and loneliness. When Fosca’s determined pursuit of the soldier leads to his touching her hand, he finds it soft and inviting but it reminds him only of Clara.

Not for long. As Clara makes it clear that she will never leave her husband and child, the plain and now very ill Fosca begins to carve a place in Giorgio’s heart. From appearing harsh and witch-like, Roger now gives the woman softness and femininity and Fosca’s willingness to bear anything if she might only hear Girogio say “I love you” captivate the man.