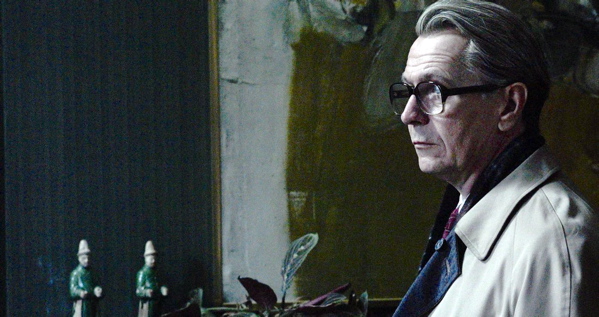 LONDON – The pleasures of a John le Carré novel on top of the sublime writing come less from plot than from atmosphere and character and that is why his best spy novels make splendid miniseries, not movies. “Tinker, Tailor, Soldier, Spy” finally gets a film treatment but it is a choppy and unconvincing shadow of the celebrated 1979 BBC series.

The tale of a master spy brought out of retirement to find a traitor in the British secret service depends entirely on the affectations and misdirection of its key players, but while Swedish director Tomas Alfredson composes impressive images, he fails to grasp the subtleties of English as it is spoken by the silky and clubbable but sly and callous men who trade in espionage.

The script by Bridget O’Connor and Peter Straughan attempts to jam in every key move in an extremely complicated chess match while Alfredson relies on a large cast of blithe and assured British actors to fill in the blanks, not all of them with great success.

Gary Oldman would make a terrific spy due to his uncanny ability to disappear into the background. Sadly, that is not the best attribute for the lead character in a movie and his depiction of Smiley pales in comparison to earlier portrayals.

Unlike predecessors Alec Guinness, James Mason and Denholm Elliott, who each employed a tone of voice and nuanced expression that could speak volumes, Oldman plays the spymaster without a shred of intonation or insinuation. His face is utterly bland and his voice is the chipped ice of English gentry. That might work if the script gave him arch observations and poisoned darts to deliver, but it doesn’t.

Smiley embarks on the search for a traitor in 1970s British intelligence with the aplomb of an upper class British civil servant who has mislaid his pipe. We suspect that he knows far more than he lets on and he must have the cunning to gull the cleverest opposition or his boss, Control, played with exactly the right mix of bombast and guile by John Hurt, wouldn’t have assigned him the task. But Oldman reveals none of it.

Le Carré’s style is to linger at the edges of his story and let details accumulate as he drives toward the point. The film has no time to do that and so while Control starts the movie already dead, he shows up so often in flashbacks that he appears to be the one running the show. It’s especially confusing in an incongruous flashback party scene, not from the novel, in which his team of spies drunkenly flirt and sing Russian songs in mockery of their Cold War enemies.

Mark Strong plays Jim Prideaux, the agent whose betrayal and shooting in Budapest kick off the hunt for a Russian mole in Britain’s spy headquarters known as the Circus. His secret placement as a schoolteacher at a rural school resonates in the novel but just seems odd in the film, and while Strong sketches the character’s depth and intelligent, he has no time to develop that.

Neither do the others. Benedict Cumberbatch catches the idealistic naivety of Smiley’s young assistant, Peter Guillam, and Tom Hardy makes field agent Ricki Tarr brash and street-smart. But the suspects are all grey middle-aged men who don’t get to say much as the director relies on their recognisable faces to do the work. It’s never entirely clear, however, what they are doing, or why.

They include Colin Firth as Bill Haydon, Toby Jones as Percy Alleline, Ciaran Hinds as Roy Bland, Simon McBurney as Oliver Lacon, and David Dencik as Toby Esterhase, and you don’t need to have read the book to figure out which among them is the villain.

Production designer Maria Djurkovic gets the claustrophobic setting just right with everything slightly faded and seedy, while cinematographer Hoyte Van Hoytema makes the duplicitous world appear suitably murky. Alberto Iglesias provides an agile score that at times seems to give an appropriate and pleasing nod to the 1960s film music of John Dankworth.