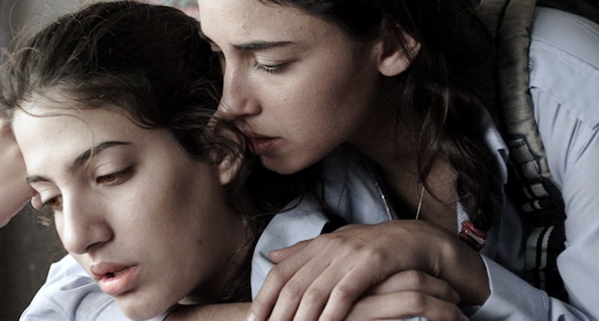 BERLIN – Canadian director Jonathan Sagall’s intriguing drama “Lipstikka” tells of two women whose memory of a dramatic incident when they were teenagers is markedly different and affects their lives in complicated ways.

Set in London with flashbacks to 1994, the film tells of two Palestinian women and their encounter as teenagers with two Israeli solders during the intifada. More of a human drama than a political one, it still hinges on the fact that in the circumstances the girls had no control over their fate.

The nature of their relationship at the time and the way their lives have turned out since give Sagall’s four actresses plenty to work with and the film should thrive at festivals and find appreciative audiences, especially among women, in key territories.

Clara Khoury plays Lara, who explains in a voice-over that she has accepted her life, which is one of suburban London comfort with a spotless home, a smart son, and a businessman husband named Michael (Daniel Caltagirone) who hasn’t slept with her since the boy was born. She keeps herself in good shape, however, with just a little vodka to soften the world.

A knock at the door one day brings a face from her past, Inam (Nataly Attiya), a slim beauty who looks little frazzled and has an edgy manner. Flashbacks reveal that Inam had a relationship with Michael before they married, and the two women also shared an intimacy felt more deeply by Lara.

Their relationship is even more complicated due to the incident more than 15 years earlier after the two of them broke curfew to go to see a movie in old Jerusalem. The young Inam (Moran Rosenblatt) was pretty and boy-crazy while young Lara (Ziv Weiner) viewed her friend’s adventures with more jealousy than envy.

Sagall gives over information about the earlier event in pieces. It involved a sexual encounter between Inam and one of the soldiers, but exactly what happened depends on very different points of view. He also reveals only slowly the truth of the women’s lives today. It makes for growing suspense, especially when Inam elects to pick up Lara’s son from school without telling her.

As the grownup Lara, Khoury offers a telling portrayal of a woman whose life did not turn out as she expected but has managed to make the most of it. Elegant and sweet looking, Khoury very subtly unveils the steel that Lara has learned to deploy while Weiner is effective as the young Lara, all watchful and self-contained. Attiya keeps Inam’s nervousness just barely under control and with just a look or change of vocal tone suggests that she could easily fall apart.

Rosenblatt has in many ways the toughest assignment since she must act more or less the same scene in two sharply different ways – as a sexy teenager in control of events, and as a victim of sexual brutality. Hers is the standout performance of the film, first smiling and provocative, and then knowing and sacrificial. Her scenes underpin what develops between the grownup women and help give Sagall’s film a satisfying resonance.