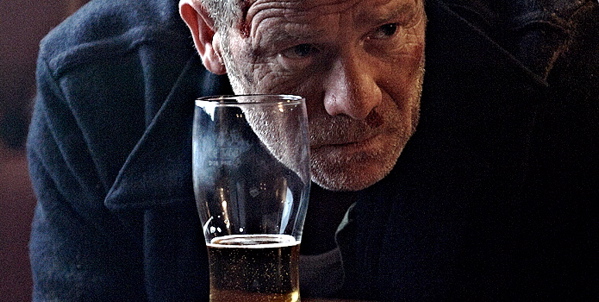 TORONTO – Joseph is the kind of man you wish never to encounter in a pub. Played with savage intelligence by Peter Mullan in Paddy Considine’s gripping if hard to watch drama “Tyrannosaur”, Joe’s default setting is not Travis Bickle’s “You talkin’ to me?” but the far more combustible, “You looking at me?”

One off glance is enough to spark an eruption of violent anger expressed with fist, beer glass, pool cue, or whatever is to hand. What makes him even more dangerous is that he actually feels better if he comes off worse. That is, until the remorse sets in and his excoriating self-hatred takes over.

Actor turned writer/director Paddy Considine and producer Diarmid Scrimshaw made a short film six years ago titled “Dog Altogether”, which aimed to show that a man seen kicking his dog to death could still win an audience’s sympathy. The character was Joe, played by Mullan, and the piece landed a Bafta Film Award as best short film.

Now, the feature film based on the same premise achieves a similar result although it takes a while before Joe’s redeeming qualities begin to emerge. Out of work but with enough to manage, Joe lives a bitter childless life after the death of his wife, whose character is summed up by Joe’s cruel use of the film’s title to describe her.

After his dog’s demise and following a spontaneous assault on some young pool players in a pub, Joe staggers into a charity shop and hides in shame behind the hanging clothes. The shop assistant, a diffident woman named Hannah (Olivia Colman) is fearful but emboldened by her proclaimed faith, she offers her help.

Joe rips into her verbally and leaves, but as the film goes on he returns and they begin a relationship based on despair and an inability to communicate. Matters become heated when Hannah reveals that her husband James (Eddie Marsan) is deeply conflicted between born-again Christianity and his own furious lust, which results in extreme jealousy and a tendency to beat his wife.

Mullan gets under the skin of a belligerent individual who is almost impossible to like and shows the suppressed humanity within. Colman, best known for comedy in shows such as “Green Wing” and “Rev”, plays Hannah as a gentle and mistreated soul who finds in Joe the inspiration to discover some nerve. In his few scenes Marsan sketches vividly the ugliness of the husband’s nature.

Considine handles the three leads with great understanding and it’s only when he ventures into group scenes, especially a tiresome singalong wake for another temperamental drunk, that his grip appears to be less certain. It’s a fine directorial debut, however, and it suggests that he will continue the tradition of gritty British filmmaking established by the likes of Ken Loach and Mike Leigh.