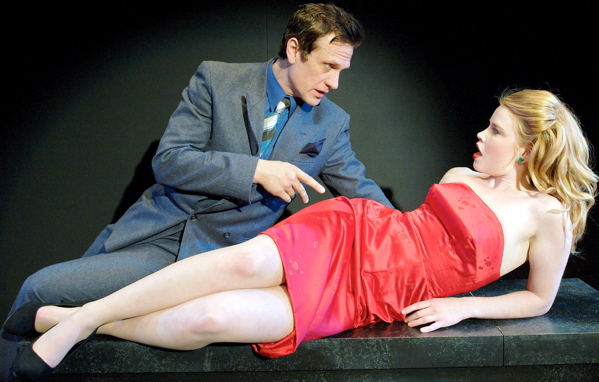 LONDON – As Alvin Rakoff’s production of Adam Rolston’s “A Sentimental Journey”, about the life of Doris Day, opens in Los Angeles, the British-based filmmaker and stage director takes on another Hollywood icon with the World Premiere in England of a play based on Raymond Chandler’s noir classic “The Big Sleep”.

“A Sentimental Journey”, which stars British musical star Sally Hughes and opens at the El Portal Theatre in North Hollywood on Nov. 2, began life at the well-regarded dining and theatre venue The Mill at Sonning, just outside London.

“The Big Sleep”, which Rakoff adapted with his son John D. Rakoff, has just opened at the same theatre and it is a creditable take on Chandler’s notoriously dense private eye caper about a rich man’s two daughters and the dangerous company they keep.

The venue’s small stage means that set designer Eileen Diss must make use of simple furniture and a backdrop with several doors to create the illusion that characters move between a large mansion, a seedy hotel room and a gloomy bar.

Silhouetted black-and-white images are projected onto the art deco backdrop to suggest some of the shadier goings on that involve Chandler’s regular community of rich men, tough guys and easy women.

Simon Merrells looks and sounds the part of a no-nonsense ex-cop who walks the mean streets with dignity although he’s not averse to meting out a slap when a dame gets hysterical. The adaptation uses the first person as in the novel and the Rakoffs give Marlowe some wry lines that play off the restrictions of the set.

Samantha Coughlan plays the older daughter with the right mix of cool disdain and vulnerability while Anna Doolan conveys the reckless younger sibling’s tentative grip on full mental health and her freewheeling sexuality.

The other men in the cast have multiple roles with Michael Percival best as a frail but disciplined rich father and Martyn Stanbridge colourful as an overworked detective.

Running for two hours including an interval, the play has enough of the novel’s punch and intrigue to please audiences and with a bigger budget for sets and sound, it might well go places.