PREVIEW: George Clooney in ‘The Descendants’ 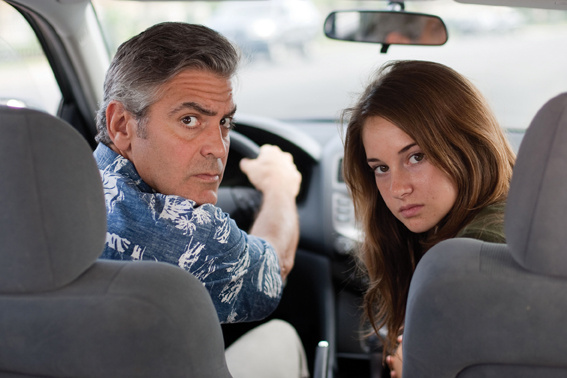 When Kaui Hart Hemmings’ novel “The Descendants”, about a family in Hawaii troubled by modern anguish and ancient concerns, was published in the UK, the Daily Mail’s response was typical. Her assured touch and fine grasp of the absurd “ensures that this novel steers a deliciously scenic route between heartbreak and hilarity,” the paper said.

Now most critics have said the same about the film version starring George Clooney, which Fox will release in the UK on Jan. 27. He plays a busy lawyer named Matt King who has neglected his wife Julie and two daughters to the point that his spouse has taken a lover and he hardly knows his kids.

He also is responsible for the sale of his family’s vast swathe of inherited land on the beautiful island of Kauai and the story is about how Matt deals with everything after Julie ends up in a coma after a boating accident.

Daily Mail film critic Chris Tookey calls the picture, directed and co-scripted by Alexander Payne, a masterpiece: “Here’s a certainty for consideration at the Oscars: a grown-up, perceptive, funny film about family and responsibility, subjects rarely covered in movies except in clichéd, romantic terms.

The movie was well received at the Toronto International Film Festival where Clooney and Payne revealed that the actor had been considered for Payne’s 2004 film “Sideways”.

Clooney said, “I was very close to getting ‘Sideways’ but he gave it to someone else. Before I read this script, I took the project because I wanted to work with him and then I read the script and said, wow, I want to do this part … a really good script in the hands of a really good director, it’s an easy yes.”

Payne said, “He’s really one of the few contemporary stars that I wanted to work with. I expected that we’d hit it off. It just worked out that he was completely the right choice.”

Clooney said the screenplay was the key: “You can make a really bad movie out of a good script, but you can’t make a good movie out of a bad script. When you see the film the thing that is Alexander’s specialty is the ability to switch on a dime between funny and sad. It’s hard to do, and it’s hard as an actor to do.”

But he said that to play a father was just like any other role: “I’ve played a father before, a few times. I don’t think you have to shoot heroin to play a heroin addict. I’m not running for president but I can play a candidate. Most of the time you don’t have to have those things in your life to understand what it was like. And I had these girls with me and it was like having children except you get to give them away at the end of the day, which was nice.”