Andy Griffith on why ‘No Time for Sergeants’ cheated 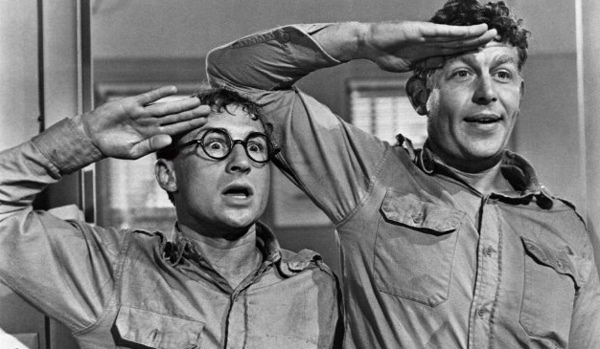 Andy Griffith didn’t do a great many interviews but I spent most of the afternoon of March 18, 1986 with him, just the two of us in an otherwise empty dining room at what I seem to recall was the Lakeside Golf Club in Burbank.

Griffith had joined me to talk about ‘Return to Mayberry”, a TV movie with most of the old cast from “The Andy Griffith Show”, but we had lots of time so we spoke of many things. This is the first in a series of excerpts from that interview.

ANDY GRIFFITH: “My first experience with people talking about something before it happened was a good one. It was a play called ‘No Time For Sergeants’. We were rehearsing at the Alvin Theatre (now the Neil Simon) there on 52nd Street, and they were telling about how we were a hit already. I recall that Morton Da Costa, he was the director, said, “I wish they wouldn’t do that.” But then we went to New Haven and then Boston and then back to New York and we were an absolute smash. Standing room only for two years.

The [1958] movie was in no way as good as the play. The movie was, as far as I’m concerned, OK. Not to step on anyone’s toes, but a play doesn’t necessarily translate to screen. If you’re gonna put a play on the screen you need to give it a screen treatment, and that’s not what happened with that, pretty well.

The only thing that changed … and it’s a shame … was a scene in the play that came from the book. You know, it was a bestselling book first, and the man who wrote it, his name was Mac Hyman. He only wrote two books and he died at 42. Anyway, there are two central characters, Will Stockdale, that’s the part I play, and Ben Whitledge, his friend [Roddy McDowell in the play, Nick Adams in the movie]. They were going through testing to see if they could make it to Air Force gunnery school, which is not what Will wanted and not what Ben wanted.

At a certain point, the two of them are standing and Ben becomes very angry and throws his cap down and stomps on it. A lieutenant comes by and he’s black. The man who played him originally was Earle Hyman, a fine, fine actor, Shakespearean actor. I think his line was ‘Is that any way to treat government property, private?’ Ben Whitledge snaps to a salute and Will is just staring at this man. There was a little more dialogue, mostly from the lieutenant. Finally Ben elbows Will and Will salutes in a kind of limp way. The lieutenant leaves and Ben says, I think the line was, ‘Don’t you know enough to salute an officer when you see one?’ And Will says, “You know, that man talks whiter ‘n I do’, and it always got this gigantic, huge, wonderful laugh.

That’s what made the sergeant and the rest of ‘em think that Will was colour blind. In the movie, they made the lieutenant a woman. To put a WAC in instead, as if he couldn’t tell the difference between a man and a woman, was a real cheat. I was always, always sorry about that. Even in those days, I said, “Gee, isn’t there some way we can go ahead and do this?’ But they were afraid. But it was in the play. What a scream that got every night. Still, it’s a pretty good show. It made a fortune for Warner Bros.”