British comedian Jimmy Edwards sauntered into the lobby of the Pontchartain Hotel in Detroit an inch or two behind a magnificent white moustache, cane in hand and a Moss. Bros. light brown bowler atop his portly frame. January 7, 1976.

“I wouldn’t be seen dead looking like this in England,” he confided, smiling, “but over here I wanted to look English.” 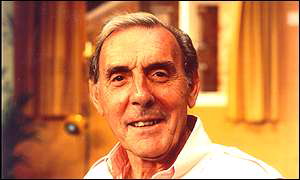 A few moments later, another British comedy legend, Eric Sykes, Edwards’ partner in the comedy “Big Bad Mouse”, which had opened at the Fisher Theatre on Jan. 6 for a month, strolled down nursing a cigar and the after-effects of a first-night brush with a testy 12-year-old named Glenlivet. Malt whisky, that is.

“That is absolutely the last alcohol I will ever touch in my life,” groaned Sykes.

“Bloody twit stayed at the party ‘til three,” roared Edwards. “I got out at 1:30. Glenlivet will do it every time.”

“Never again” said Sykes as a photo session concluded and we adjourned to Edwards’ room briefly before going to lunch.

Two seltzers later, Sykes sipped a Schlitz beer as Edwards sipped a Bloody Mary and reflected on the problem of being virtually unknown in the United States. 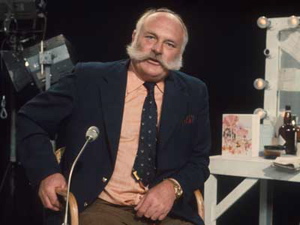 “People know us in most places we go to in the English-speaking world. But here they don’t know us from Adam. What we face here is what every young comedian starting out faces every night. We really have to work. We have to let the audiences know who we are so that by the third or fourth acts they can anticipate and identify with us,” he said.

“I enjoy that, though. It’s very nice in England to play to a full house of people who’ve known you fir years and show they like you. Then we can coast through a show. We don’t have to work at the laughs. Here, we have to slog and it’s a creative challenge that I like.”

That Sykes and Edwards could be so famous in certain parts of the world and almost anonymous in others was a show-business phenomenon shared by such as Johnny Carson and the late Ed Sullivan. Household names in North America, they were virtually unheard of elsewhere.

In Great Britain, Sykes and Edwards had the kind of fame accorded the likes of Jack Benny and George Burns in the States.

Edwards, 55, was the son of schoolteachers and planned a teaching career until the Second World War came along and he joined the Royal Air Force. Her served as a pilot until 1946 and was stationed in Ontario for a time, making runs from Hamilton to Sarnia and Windsor.

As with many famous British comics, he got his first break at the notorious Windmill Theatre in London. Noted for its slogan during the war of ‘”We never closed”, the Windmill offered patrons naked ladies who were not permitted by the Lord Chamberlain’s office to move, and young would-be comedians.

Soon, Edwards was on the radio with a show called “Take It From Here” with Australians Joy Nichols and Dick Bentley. It was a hit and he went on to stage and film successes and three BBC television series including one called “Whack-O”.

In the early ’60s, he ran for British parliament as a Conservative and when he lost it nearly cost him his career. “I had a bit of a lean time of it for a while. People were afraid that because I’d stood for the Tory party I had alienated at least half of the population. But soon after that, ‘Big Bad Mouse’ came along for the first time. I’d turned it down once but then Eric decided to do it, and I joined him,” Edwards said.

The pair had been doing the show on and off since 1966 in London and on tours around the world. The show was in Toronto and Hamilton before Detroit and would move on to Rhodesia and South Africa later that year.

Sykes, 52, left his Oldham home at 14 and had assorted jobs until he, too, joined the RAD for the war. Afterwards, he began writing comedy material for comedians such as Frankie Howerd, Tony Hancock and Norman Wisdom and wrote 40 variety shows for ATV, the private television group, in England.

He was known best in Great Britain for a long-running comedy series in which he stars with tubby comedienne Hattie Jacques. The show was into its 18th year by then and Sykes had written every one although there were much fewer shows in a British season than in the United State.

Sykes said he was appalled by the state of situation comedy on U.S. television: “They do it by computer in the States. They take a show like ‘Till Death Us Do Part’, which is hard-hitting, biting satire, and turn it into funny families, the Archie Bunker show. It’s terrible. It’s pap.”

Sykes, along with Peter Sellers, Harry Secombe and Spike Milligan of “The Goon Show” and Michael Bentine of “It’s A Square World” were the British forebears of “Monty Python’s Flying Circus”. Sykes made many films including “Theatre Of Blood”, “The Spy With The Cold Nose” and “Those Magnificent Men In Their Flying Machines”.

One picture could have made him an international movie star if the deal had come off. He played a serio-comic assassin in a spy spoof called “The Liquidator” starring Rod Taylor as a reluctant James Bond type who hated guns and always turned to Sykes to carry out his dirty work for his boss Trevor Howard.

Sykes told me: “It was supposed to have been a three-picture deal and that’s why I liked it. The idea was that in the second one Trevor Howard found out about Taylor hiring me for the killings and in the third one he decided he didn’t need Taylor and simply used me. Unfortunately, the backer ran out of money, or something, and the first film was held up in litigation for over a year. By the time it was released, the spy boom was over and it had missed its time. The deal on the other pictures fell through.”

Sykes wrote and directed movies, too, in the manner of Richard Lester’s inspired Goon picture “The Running, Jumping And Standing Still Film”. “You’d Better Go In Disguise”. “The Plank”, and one titled “Rhubarb”, were not released widely outside Great Britain but they attained cult status there. “Rhubarb”, for example, involves characters whose sole dialogue is the rhubarb-rhubarb mumble used for crowd scenes in radio comedies.

Sykes and Edwards teamed up for “Big Bad Mouse” when the spirit moved them although there was no set pattern and both felt that might be the last run.

Both men are perturbed about the current state of England. Sykes said, “We’re sitting on a tinder-box and it could explode at any moment. Everyone who’s successful has thought of leaving. The taxes are so punitive you can’t even leave your kids anything you’ve worked for. But it’s difficult when you love the place.”

Edwards, who plays polo with the Duke of Edinburgh – ”I’m, what’s married to ‘er’ as he said in the play, said, “I don’t think I could leave but I do accept all the foreign tours I’m offered. After South Africa, Eric will go back to do the telly in England and I’m off to Australia for three months with my act.”

Then Sykes would return to his wife and four children in southern England.  He signed the guest book at London’s famous Top of the Tower restaurant drop what is now the BT Tower below another famous signature. Muhammad Ali signed his: Heavyweight Champion of the World. Eric Sykes signed his: Welterweight Champion of Weybridge.

Later during their Detroit stint, I invited Edwards and Sykes to cross the border to join me at lunch at Ye Olde Steak House in Windsor. They praised the steak and kidney pie and shared yarns about characters from Tony Hancock to John Lennon. Edwards also joined me for a lunch at the Pontchartrain with John Dankworth and Cleo Laine who also were in town to perform and had never met. Sykes begged off, but not with a hangover, he assured me, simply a bad cold. Great characters!