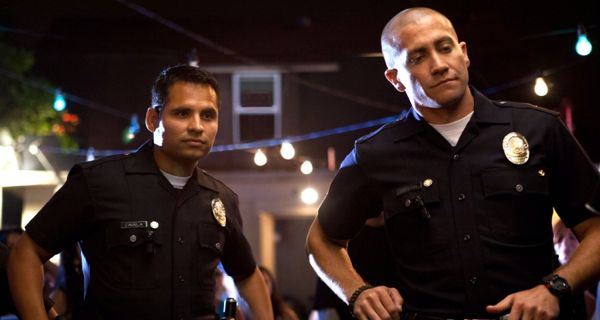 TORONTO – David Ayer, whose screenwriting credits include “Training Day” (2001) and “S.W.A.T.” (2003), shows the Los Angeles Police Department in a glowing light in “End of Watch” but it’s still a tense and engaging crime picture.

Jake Gillenhaal, as Brian, and Michael Pena (“The Shield”, “Battle Los Angeles”), as Mike, (pictured) play the tightest of partners as they answer the call to protect and serve in uniform in some of the harshest areas of L.A.

They joke and mock and share intimate secrets about their relationships like the brothers they declare they are, but their pursuit of bad guys is relentless and ruthless.

Ayer paces the film like a souped-up music video with an aggressive but textured score by former Barkmarket artist David Sardy. The action on the city’s meanest streets – sun-scorched by day; jagged blinding light and shadows at night – is all smash cuts and images cropped and jarring.

Many visuals come from the videocamera that Mike uses against orders to document their day along with other nifty recorders that attach to uniforms and their cruiser. The images match the chaotic nature of their days and nights as they answer calls from domestics to assaults to house-fires.

The ferocity of their law-keeping is made clear in an opening chase and shoot-out and their bravery depicted when they respond to a residential blaze where children’s lives are in danger.

They banter with fellow cops, male and female, and barter with gangbangers for a kind of peace. Mike goes home to wife (Natalie Martinez) and kids while Brian’s love (Anna Kendrick) gets to know the way cops view themselves, their work and their families.

A time-bomb begins to tick when the two officers stumble across a human trafficking operation tied to a Mexican drug cartel that a federal agent advises they back away from. Since that’s not what they do, the pair face an escalating degree of peril.

Ayer keeps the pace ramped up much of the time, pausing now and then to show the camaraderie of the two cops. Gyllenhaal and Pena look the part both in action and the small, often comedic, moments between them.

Martinez also shines in a funny scene in which she details some things the prospective cop’s wife should do to keep her man happy at home. These are moments that when the ordure hits the fan, as it surely must, it is easy to understand why Ayer admires them so much.