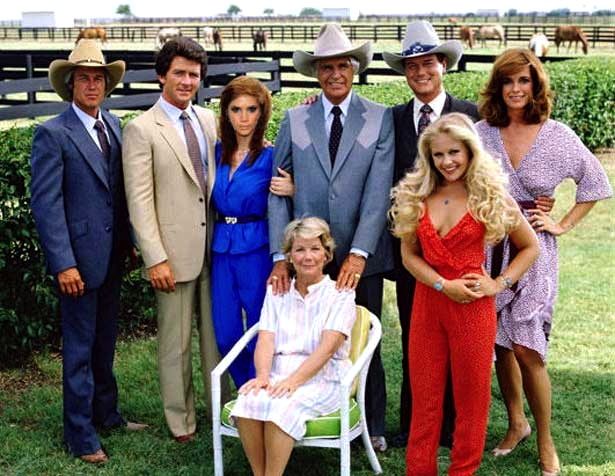 LONDON – Larry Hagman, who has died aged 81, was one of the great TV villains. He became a household name thanks to “Dallas” but when the show aired a short-run summer series in 1978, not many critics paid attention. It caught my attention in Toronto, though, and I reviewed it TV Guide Canada a couple of weeks after its debut. Here’s how it went:

The plaintive cry of the fourth quarter of the 20th century is: where have all the heroes gone? But it is my long held, if unproved, theory that what the world needs are fewer heroes and more villains. On TV, that is. Certainly villains abound on the news and in party political broadcasts and the like but their evil is either too monstrously real or worse banal.

Bad guys on television these days barely qualify for their black hats. Snarling hoodlums are reduced to jelly by white-haired old men, detectives’ wives and pretty girls in T-shirts and teeth. Anti-defamation leagues have (with justification) robbed us of the classic villainous racial stereotypes, leaving only diseases and natural disasters to wreak chaos and mayhem.

There are some nasty characters in the soap operas but in prime time we have for too long existed without someone we could hiss and boo. What we’ve needed is a character with no redeeming qualities, a rotter, the kind of heel who would push his grandmother downstairs. Smiling.

At last, in “Dallas” (Thursdays 10 p.m. CBC and Fridays 10 p.m. CBS) we have one. J.R. Ewing is the first son of an oil-rich Texas ranching family. Around him hardly anybody’s grandmother is safe. As played by Larry Hagman, J.R. Ewing is perfectly detestable. He grovels before his daddy, Jock the Patriarch; whines to his mother, Miss Ellie; schemes against his brother, Bobby; cheats on his wife, Sue Ellen; and plans to sell the ranch for the oil underneath as soon as the folks expire.

Any way you cut it, J.R. is a swine. And Hagman plays him lovingly. Sue Ellen is almost as bad, having married for money and cemented her claim by getting pregnant. That J.R. is not the father is neither here nor there. And while this circumstance is pure soap opera, in the hands of Hagman and Linda Gray, arguably the most riveting actress on television, it becomes if not great drama, great fun to watch.

Especially when you compare the entire Ewing family on “Dallas” to the simpering aggregations on most of the other family shows. On most of them, all you get are people screaming at each other, whether in anger or out of passion it’s difficult to tell. There’s seldom a yelling match on “Dallas.” The Ewings make each other bleed with fine knives. And there is something about a Southern U.S. accent that lends itself to subtly deadly dialogue.

Jim Davis, who founded the famous acting school of squint (Earl Holliman and Robert Fuller are among the graduates), is suitably craggy as Jock and Barbara Bel Geddes radiates calms as Miss Ellie, although her monotone utterances of moderation do grind at times. And on the side of mom and apple pie there’s Bobby Ewing and Pam, his wife, played by Patrick Duffy and Victoria Principal. Ms. Principal is pure Playboy material and Duffy is almost as pretty. In their niceness they are perfect foils for the unmitigated decadence of J.R. and Sue Ellen.

In fact, precious few people on television outside of detergent and household cleanser commercials and Dean Martin roasts radiate such glorious and irredeemable hatefulness as Larry Hagman and Linda Gray. Long overdue, if you ask me.