Ang Lee’s extraordinary film “Life of Pi” is a shaggy tiger story with the best computer generated images and most delicately effective 3D yet achieved in a mainstream film.

The tale of an Indian boy’s adventures at sea in a lifeboat with a Bengal tiger named Richard Parker – made incredibly lifelike by the excellent CGI – boasts imagery of storms, giant waves, placid calm and assorted sea creatures to take the breath away.

Magical realism on the page can be tiresome, but it comes alive on  the big screen. Yann Martel’s 2001 novel, which won the Booker Prize and has sold in the millions around the world, apparently also suggests that the man versus nature struggle in the story has something spiritual to say about the existence of God.

That may be, but in the hands of director Lee and screenwriter David Magee (“Finding Neverland”), “Life of Pi” is less about divinity than about the power of imagination. The story is told by a man named Pi Patel (Irrfan Khan) to a writer (Rafe Spall) in need of a hook for a new book. Like the very tall tale narrated by the 121-year old Jack Crabb in Thomas Berger’s masterpiece “Little Big Man”, it relates the horrific experiences of a young man devastated by the loss of his family and pitted against the worst that man and nature can offer who conjures up an epic yarn of survival against all odds.

Lee allows only one clumsy scene toward the end of the picture to mar the high level of storytelling when the writer reduces the magic of the tale to its mundane and ugly roots. As the bible shows and as the newspaperman in “The Man Who Shot Liberty Valance” says, it’s best to print the legend.

Besides the absolutely invisible effects, Lee draws fine performances from the three principal performers who play Pi. Khan relates the story with a savvy mixture of utter conviction and droll sarcasm as he pushes the writer to deny his fable. Ayush Tandon is the youngster keen to have his schoolmates stop calling him Pissing because he was named after a French swimming pool and determined to master as many religions as he can despite the pragmatism of his zookeeper father.

Suraj Sharma takes over when Pi’s family decide to move from India and set sail  with their animals in a rickety merchant vessel with an unpleasant crew. It is Sharma as Pi who finds himself adrift on a lifeboat with five creatures from the zoo given not the slightest element of anthropomorphism. They include the magnificently independent and pitiless tiger Richard Parker, an imperious villain to rank with the best in cinema. 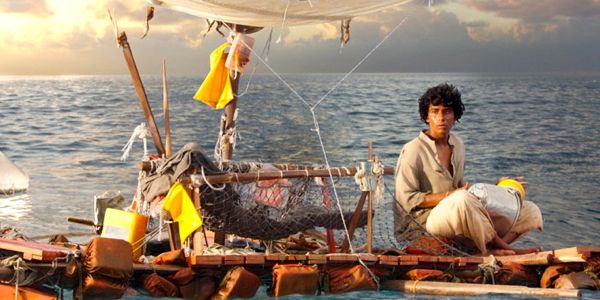