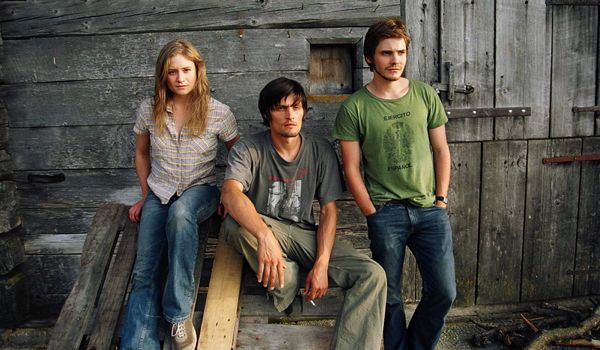 CANNES – “The Edukators” is that rare beast, a terrific movie that boasts intelligent wit, expert storytelling, delightful characters, and grown-up dialogue plus suspense and a wicked surprise ending.

The first German-language film In Competition at the festival in 11 years is a crowd-pleaser guaranteed to earn international attention. Director and co-screenwriter Hans Weingartner’s ambition is high as he grafts all the elements of a thriller onto what is a fascinating discussion of the need for kids to rebel. 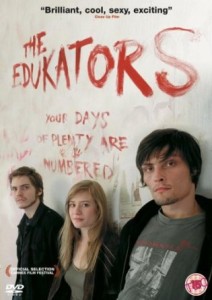 Rebellion is difficult for today’s young people when what used to be subversive is on sale at the local department store and there’s the feeling that everything has been done before. Friends Jan (Daniel Bruhl, above right) and Peter (Stipe Erceg) have their own answer. With a membership list from the city’s yacht club and armed with Peter’s knowledge of alarm systems, they break into expensive mansions in the middle of the night, but they don’t steal anything.

They stack furniture, put objets d’art in the toilet, toss the couch into the pool and stick the stereo in the fridge. And they leave a note “Your days of plenty are numbered,” signed “The Edukators.” Jan says: “We only want to scare them.”

These are youngsters who take their politics seriously. They campaign against such things as Asian sweatshops that make high-priced name-brand sneakers. They are desperate for ways to make their mark on a heedless capitalist world. Peter’s girlfriend Jule (Julia Jentsch) is brought into their nighttime adventures when Peter is away on holiday and he asks Jan to help Jule clean up the apartment from which she has been evicted. Jule is €94,000 in debt because she wrote-off a Mercedes in an uninsured car and the owner sued her, a man named Hardenberg.

Jan takes Jule to see how he cases a mansion and they end up near the street where the Mercedes owner lives. They decide to break in and with the adrenalin rush of their escapade combined with a growing mutual attraction, they’re caught unawares when Hardenberg (Burghart Klaubner) shows up and they react violently. They call Peter to help and the three decide to kidnap the man and take him to Jule’s uncle’s empty cabin in the mountains.

All of this is depicted with great flair and invention and played with pleasing naturalness and charm by the trio of young actors. Once they are in the mountains, Weingartner and co-writer Antonin Svoboda make their boldest step and carry it off with superb aplomb. As the triangle becomes more testing and the situation more criminal, Hardenberg turns out to be not quite the capitalist pig he appears. Well, he is, but he wasn’t always, at least so he claims. He was a member of the SDS in 1968, he says, and lived in a commune with his wife and four others with demonstrations, long hair, free love and the whole damned thing. Klaubner matches the youngsters with his assured performance.

The film sustains the logic of the plot brilliantly and contrives to play the boys against each other and the girl, and the rich man against the the three youngsters in scenes that are highly entertaining and satisfying. “Edukators” has the fresh breath of originality that makes going to the movies a pleasure.