THEATRE REVIEW: ‘On the Town’ at the London Coliseum 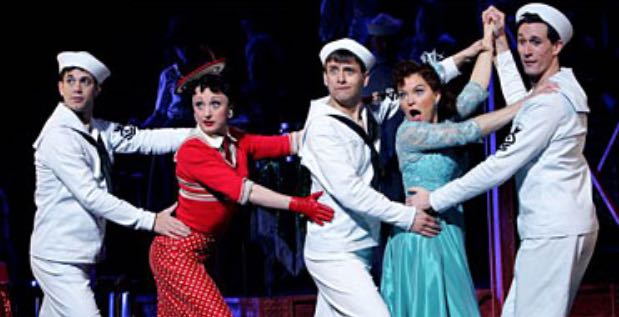 LONDON — Thoughts of “On the Town” are influenced by recollections of the 1949 film version starring Gene Kelly and Frank Sinatra, which landed at No. 19 on the American Film Institute’s list of all-time great film musicals. Approaching a stage version, that is not altogether a good thing.

Even though Leonard Bernstein composed the show’s music with lyrics by Betty Comden and Adolf Green (“Singin’ in the Rain”), the film’s directors Kelly and Stanley Donen threw out a lot of the original songs in favor of numbers by in-house MGM songsmith Roger Edens.

The English National Opera’s revival of the 1944 stage production suggests that Donen and Kelly were right. It was Bernstein’s first attempt at a major musical at age 25, and while the rousing “New York, New York” has endured, the songlist lacks the richness he would achieve later in “West Side Story.”

That ebullient song, with richly evocative words by Comden and Green, almost sustains the show but while all the songs boast clever lyrics, the remainder of the music is heavy going. The cast’s accomplished performances and sheer energy, however, make a crowd-pleasing impression.

Simon Lee conducts the full ENO orchestra with great flair and while designer Robert Jones opts for sparsely effective sets, Stephen Mear’s choreography ensures the pace never flags. This is in spite of a 90-minute first act that seems quite a bit longer. Director Jude Kelly evidently wishes to strike a topical note about fighting men missing home and uses World War Two images to make her point when a trio of sailors, Gabey (Joshua Dallas), Chip (Sean Palmer) and Ozzie (Ryan Molloy) land in Manhattan on a 24-hour leave.

They all meet cute and find ways to become entangled with do-gooders and the police before love finds its way. Dallas is a fine leading man and O’Connor and Schauffer make convincing New Yawk broads. Whitfield gets plenty of laughs with her expert clowning.

Opera purists object to the ENO putting on such popular fare but when they can pump such class and energy into a fairly dated show, it’s hard to complain.

This entry was posted in Reviews, Theatre and tagged 'On the Town', Adolph Green, Betty Comden, Leonard Bernstein, London Coliseum. Bookmark the permalink.