BERLIN FILM REVIEW: ‘The Life and Legacy of Simon Wiesenthal’

BERLIN – Concentration camp survivor Simon Wiesenthal, who lost 89 relatives to the Nazis, was for many the conscience of the Holocaust. An extraordinary man who died at 96, outliving almost all of his enemies, Wiesenthal celebrated his 90th birthday at the Hotel Imperial in Vienna. It was where Adolf Hitler always stayed. 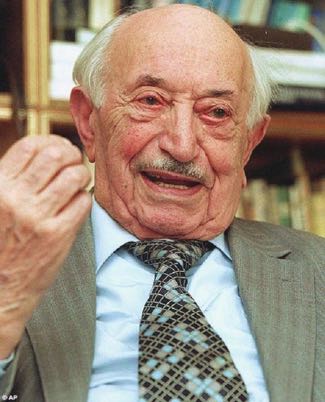 That mordant sense of humor and craving for some kind of justice permeates the documentary “I Have Never Forgotten You: The Life and Legacy of Simon Wiesenthal”. Few men in modern history deserve more accolades for a life lived bravely and astoundingly against horrific odds than Wiesenthal and the new documentary is an entirely worthy account of his torment in the Holocaust and his determination always to remember those who died in it.

Produced by Moriah Films, the Simon Wiesenthal Center’s Jack and Pearl Resnick docu division, the production appears to be a faithful record of his extraordinary treatment at the hands of the Nazis and his lifelong determination to bring them to justice. Although lacking controversy, the film will be mandatory viewing for audiences willing to bear the ugly face of history and be reminded that the world today is hardly free of war criminals.

Apart from being caught up in some political infighting in Austria and being challenged over his opinion that Austrian leader Kurt Waldheim did not rank high enough to be called a war criminal, the Nazi-hunter was admired widely throughout his life. He reminded everyone that not only did 6 million Jews die in the Holocaust but also millions of others including gypsies and homosexuals.

The film uses original footage of interviews with Wiesenthal’s daughter Pauline and colleagues from over the years plus the direst film of concentration camp horrors to trace the former architect’s life through his incarceration in many World War II camps, the murder of 89 family members, and his subsequent resolve to punish the guilty.

Wiesenthal is seen in close-up as he gives interviews to almost every famous broadcast around the world and his story never changed – he was not a hero, he was a survivor. Director Richard Trank tells the story unemotionally and is is all the better for it.

Nicole Kidman and Ben Kingsley are featured in the film but while their names might draw some bonus attention, they no serve the film especially well. Kidman’s narration is flat and occasionally her emphasis is on the wrong word in a sentence. Kingsley has become the new Charlton Heston, prattling on just because he’s played for famous historical figures, albeit including Wiesenthal.

None of that matters, however. The important thing is that the film has been made so that future generations may watch it and point to Simon Wiesenthal, and say, ‘Now, there was a man.”

Venue: Berlin International Film Festival, due for release in the U.K. and U.S. on July 27. Running time: 105 minutes.