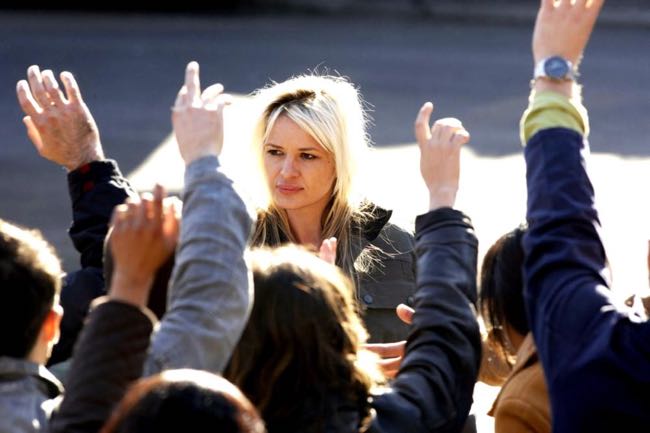 VENICE – Few countries have a handle on matters of immigration, but a combination of free market profit-seeking and nanny-state regulations has resulted in a singular mess in Great Britain, as Ken Loach illustrates in his tough-minded slice-of-life picture “It’s a Free World.”

The ironically titled movie, screened In Competition at the Venice Film Festival, focuses on a spirited young English woman who becomes inured to the fate of immigrants while working for a big recruiting agency. Battered by her own work experience, she starts up a new agency, but the opportunity to make big money by exploiting the desperate and vulnerable leads to corruption and violence.

Loach is in excellent form as he makes the most of a shrewd screenplay by Paul Laverty and draws a winning performance from newcomer Kierston Wareing (pictured) as a brassy and misguided entrepreneur. The film should play well when it is telecast on Channel 4 in the U.K., and prospects are bright for its theatrical release elsewhere, not least because the dilemma it profiles is universal.

Immigrants enter the U.K. from all over the world, legally and illegally, and many of them are at the mercy of recruitment agencies that, if not entirely criminal, have dubious credentials. At one of them, Angie (Wareing) has a knack for placing workers into jobs but gets no respect from her male co-workers, who mostly see her as sexual fodder.

When she complains, she is fired and so Angie convinces her roommate, Rose (Juliet Ellis), a college graduate who works at a call center, that they should go into business for themselves. Angie has a way with men, so she makes the rounds drumming up business while Rose works the phone and the Internet.

No matter how well-educated people might be in their home countries, qualifications are irrelevant and the only work available is drudgery. Angie and Rose make contracts with builders, caterers, packagers and others for a given number of workers. Then they contract with the immigrants and send them jammed into vans for a day’s work.

The film provides an urgent snapshot of one small part of a big problem and offers a memorably tragic character in Angie. She goes nose-to-nose with tough-guy employers and fights for every inch of her place in the world. But she can’t keep a relationship with a smart and caring Polish man (Leslaw Zurek), and the more things get out of hand, the more callous she becomes and the more willing to flout the law.

And while she chases her materialistic goals, she also deals with the pressure of being a single mother whose son, Jamie (Joe Siffleet), is in trouble at school and whose father, Geoff (Colin Caughlin), is a retiree who recalls when working people were paid more respect.

That’s a word that has little place in the world sketched by Loach and Laverty. They offer no answers in this vivid and troublesome film, but then there probably aren’t any.