BOOKS: On surviving icepicks in the brain: ‘My Lobotomy’

Charles Fleming, journalist, novelist and one of my very best of friends, has a new book out titled “My Lobotomy” written with a man named Howard Dully who underwent the most hideous surgery you can imagine when he was 12. 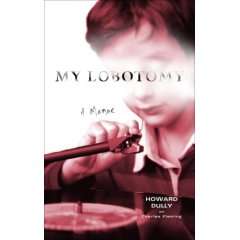 His new one has received great reviews and is available on Amazon.

He writes from his home in Los Angeles: “It is a gripping, heart-breaking and ultimately quite redemptive story about the first-ever lobotomy survivor to come forward and tell his story. He was one of the youngest people ever to undergo a transorbital or ‘icepick’ lobotomy. The story of how he got the procedure, what it did to him and the nightmare it made of his life makes exciting reading. He’s a terrific guy with a terrific story to tell.”

This entry was posted in Books, News and tagged 'My Lobotomy', Charles Fleming, Howard Dully. Bookmark the permalink.