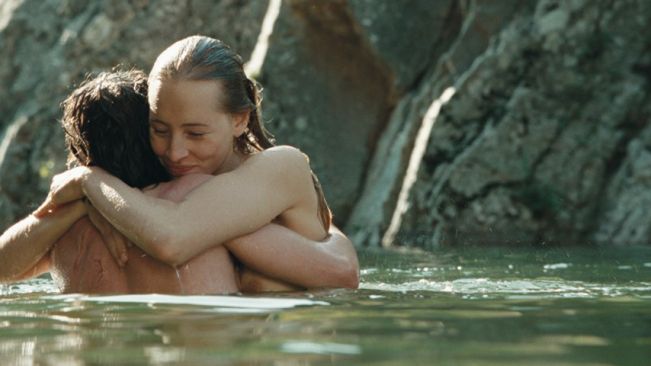 Set in the handsome countryside of southern France in 1865, the opening film at the Locarno International Film Festival is filled with lovely scenery and has many sequences showing the voluptuous Isild Le Besco nude in the throes of extreme passion. It could be viewed as the flight of an excitable woman’s febrile imagination but given that it’s written and directed by a man, it also smacks of sheer male fantasy.

Benoit’s fans will likely applaud his distinctly non-PC approach and the pictures are very pretty but the film lacks gravity and leaves too many questions unanswered to take it beyond festivals and art houses.

Not least of its potential problems is that the man in the story – a wanderer named Timothee, more of a boy really – is depicted as a filthy scamp with dirty teeth and fingers, broken nails and smelly clothes. Nahuel Perez Biscayart (pictured with Le Besco) has big eyes, a wide smile and impish charm in the role, but he looks awful. He is, however, a confident trickster with the ability to reduce the often blank-faced Josephine (Le Besco) to compliant jelly merely by running his fingers down her spine.

Appearing lecherous and sneaky, he espies her first in church with her family and then shows up at her home claiming to be deaf and mute. Josephine is betrothed but seems to be a troubled girl. Her doctor father is sympathetic to the boy and wants to treat him, and over dinner Timothee demonstrates an entertaining knack for illusions. But then he shows how easily he can cause the young woman to quiver in her bustle, and he puts her under his spell.

Timothee takes Josephine into the woods and they do to each other the kind of exciting, nasty and satisfying things that lovers often do. The problem is that as far as her family is concerned, Josephine has been kidnapped, and a search begins.

The consequences of their trysts, including Timothee’s arrest and trial, raise the rather large question of whether Josephine was willingly complicit or he was guilty of a violent sexual crime. Jacquot’s resolution will no doubt divide audiences but not really leave them much to chew on.