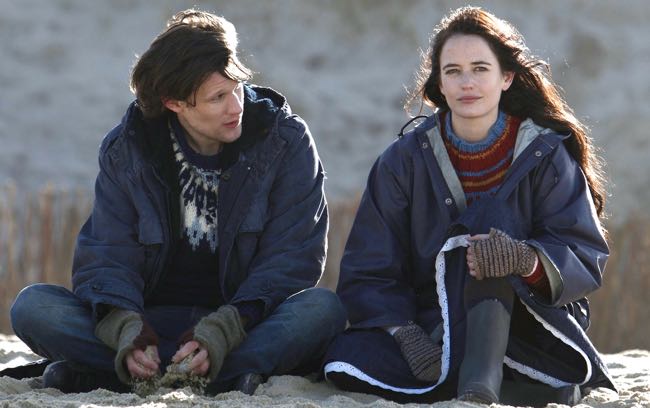 LOCARNO, Switzerland – There is an old joke about a woman who had a glass bellybutton. She had a womb with a view, which is more than can be said for Benedek Fliegauf’s “Womb”, a sappy drama about human cloning that has no point of view at all.

In a sense, it’s a film about a woman who goes to extraordinary lengths just to get laid. When her lover is killed in a road accident, the woman, played by Eva Green, goes to her local Department of Genetic Replication and bears a cloned child. She raises him until he’s the absolute spitting image of her deceased amour (Matt Smith) and then goes about eyeing him with lustful indications of heightened excitement.

Gorgeous seaside vistas; the ineffable beauty of Green; the growing international fame of Smith, who is the BBC’s new “Doctor Who”, and the fascinating topic itself should be enough to create some spark at the box office but it’s unlikely to go forth and multiply.

It’s clear that young Rebecca (Ruby O. Fee) and Thomas (Tristan Christopher) are a match because they live close to one other on a beautiful stretch of windswept beach and love to go exploring. They share excitement in flotsam and jetsam and delight in examining assorted sea creatures, and it’s sad when the girl’s parents take her off to live in Japan.

These scenes are quite lovely to watch and cinematographer Pete Szatmari’s images remain so throughout the picture. Not least when Rebecca returns 12 years later in the form of Green, than whom the camera loves nothing better.

Tommy (Smith) is smitten instantly and drops his latest pickup, and they swoon into their destiny. Until he steps in front of a van. Shattered, Rebecca is drawn towards the local replication clinic, which is the only indication the story is set some time in the future. Tommy’s parents, played by Lesley Manville and Peter Wight, think it’s a bad idea, however, and move away promptly.

Fliegauf’s screenplay raises the issue of cloned humans as the victim of prejudice just like any other alien, legal or otherwise, but just as soon drops it. It toys with the ethical issue of human cloning but runs away from that too.

It all seems to be about Rebecca’s hunka hunka burnin’ love, and prospects brighten for something macabre at their remote oceanside shack when teenaged Tommy brings home pretty young Monica (Hannah Murray) and mom takes on the airs of a woman scorned.

The carving knives appear suddenly attractive in the kitchen, but perhaps she will be content to explain to the creature she has borne that his daddy’s not his daddy, but his daddy don’t know. Or will it be straight to bed?

If the writer/director had been willing to strike out more boldly, the answer to these questions would have some power, and the film might have become more than an intriguing premise and pretty pictures.