Charles Strouse earns his applause at the ASCAP awards

LONDON – No matter their age nor how well they sing, there is something magical in songwriters performing their own tunes. Broadway veteran Charles Strouse (pictured), who turns 80 next year, proved that at the 2007 ASCAP Awards banquet at London’s Grosvenor House Wednesday night. 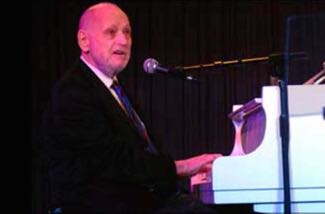 Strouse won standing ovations from the seen-it-all industry crowd after warbling such hits as “Once Upon a Time,” “Kids,” “Applause,” from his hit show of the same name starring Lauren Bacall, and “Tomorrow” from “Annie.”  Besides his musicals “Bye Bye Birdie” and “Annie”, the Tony-winning composer and songwriter composed the scores for movies such as “Bonnie & Clyde” and “The Night They Raided Minsky’s.” He also wrote the theme for TV’s “All in the Family.”

I was at a table with prizewinning composers Patrick Doyle, Anne Dudley and Alex Heffes, who joined in the enthusiastic response. A few tables away, record producer George Martin and Lady Martin and Oscar-winning lyricist Don Black and his wife Shirley also were on their feet.

Academy Award-winning composer Anne Dudley and nominated composers Patrick Doyle and Dario Marianelli were among the winners in the film and television music prizes presented at ASCAP’s’s annual banquet that honours members of Britain’s Performing Rights Society for the most performed works in the U.S. in 2006.

Norwegian pop duo Tor Hermansen and Mikkel Eriksen (Stargate) were named songwriters of the year and their “So Sick” was named best song. EMI Music Publishing U.K. was named publisher of the year.

ASCAP senior vp international Roger Greenaway told me ahead of the event: “It’s safe to say that the performing rights end is not doing as bad as the record industry these days because we’re about performances and they’re about physical recordings, although we do feel their pain. We’re not safe, but we’re safer. In fact, we see a rise of 4-5% over the next two or three years.”

In this year’s film prizes, Dudley, who won the Oscar for “The Full Monty” in 1997, was honored for Kevin Reynolds’s “Tristan + Isolde.” Current Dudley projects include Paul Schrader’s “The Walker” and Lynda La Plante’s ongoing ITV miniseries “Trial & Retribution.”

Doyle’s ASCAP prize was for Stefan Fangmeier’s 2006 fantasy “Eragon.” Current projects from the veteran U.K. composer (Oscar-nominated for “Sense and Sensibility” and “Hamlet”) include “The Last Legion” and “Sleuth.”

Marianelli, who won for “V for Vendetta,” was an Oscar nominee for “Pride & Prejudice” (2005) and might be in the running next time for the hit “Atonement.” He also scored current pictures Neil Jordan’s “The Brave One” and Asif Kapadia’s “Far North.”

Other film music honorees were John Taverner, who won for Alfonso Cuaron’s “Children of Men.” A legend in classical music, his rare movies include Carlos Reygadas 2005 Argentine film “Battle in Heaven,” which was In Competition at the Festival de Cannes in 2005 and won the critics’ prize as best Latin American film at the 2005 Rio de Janeiro International Film Festival.

Alex Heffes won for Kevin Macdonald’s “The Last King of Scotland.” His credits include “Touching the Void” (2003) and “Dear Frankie” (2004) and he scored Macdonald’s new documentary on Nazi Klaus Barbie, “My Enemy’s Enemy.”

The ASCAP television theme awards went to “American Idol,” “Dancing with the Stars,” “House” and “Who wants to be a Millionaire?”

Songwriters Hermansen and Eriksen had seven of the most performed songs in 2006 including Ne-Yo’s “So Sick” and “Sexy Love,” Rihanna’s “Unfaithful,” Kelly Clarkson’s “Walk Away,” sand Beyonce’s “Irreplaceable.”

Their success went a long way to helping EMI land the publishing prize for the fourth time, as managing director Guy Moot emphasised: “For Stargate to pick up seven awards, including Songwriters of the Year is particularly pleasing in a year that has seen them make a huge breakthrough in the U.S. With other wins for Yusuf Islam, Phil Collins, Mick Jagger, Keith Richards and Lenky, it’s good to see the diversity and breadth of our catalogue being acknowledged.”

Honoring PRS writer and publisher members whose repertory is licensed by ASCAP and was among its most performed works in the United States in 2006.

Songwriter of the Year: Tor Hermansen and Mikkel Eriksen (Stargate)

A version of this story appeared in The Hollywood Reporter. Here’s more about Strouse and ASCAP