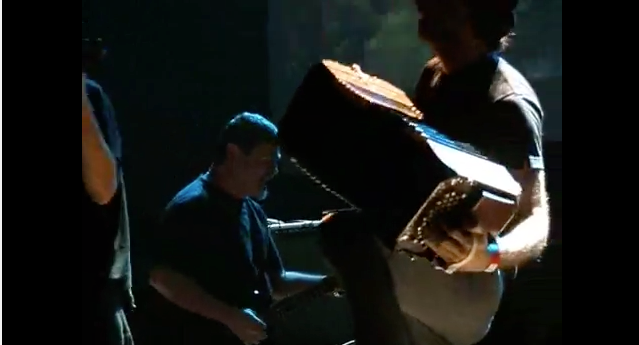 GHENT, Belgium – Double Oscar-winning composer Gustavo Santaolalla kicked off three evenings of music tied to the Flanders International Film Festival and the World Soundtrack Awards Thursday with a thunderous performance by the electrifying aggregation known as the Bajofondo Tango Club.

Rich with influences from the musical traditions of Buenos Aires and Montivideo, including tango, murga, milonga and candombe, boiled up with Argentine and Uruguayan rock, hip hop and electronica, the eight-piece unit thrilled a packed audience at the medieval city’s Arts Centre Vooruit. 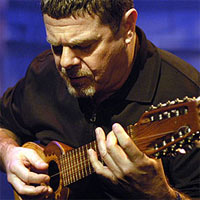 Los Angeles-based Santaolalla (left), who won back-to-back Academy Awards for his scores to “Brokeback Mountain” and “Babel,” tours with Bajofondo and has recorded two albums with the band. They played London’s Roundhouse Sunday night and were headed for Seville in Spain. On guitar and percussion, and adding his growling voice to colorful vocals, the Argentine composer stayed in the background for most of the fiery set, which lasted almost two hours.

Javier Casalla on violin and Martín Ferrés on bandoneon took center stage to drive the music with evocative video clips of life in Argentina displayed on screens behind them.

Performing tracks from their albums “Bajofondo Tango Club” and “Mar Dulce,” produced by Santaolalla and Juan Campodónico, who contributes programming, beats and samples, and plays guitar, the band maintained a furious pace through an irresistibly sensual combination of melody and percussion.

Santaolalla provided one memorably hushed moment playing a theme from his score to the 2004 Walter Salles movie “The Motorcycle Diaries.” The composer said he is completing a new film with Salles based on the album ” Café de los Maestros,” which could do for the tango of Argentina what Ry Cooder’s “Buena Vista Social Club” did for Cuban music. It is expected to debut in February at the Berlin film festival.

Meanwhile, Bajofondo climaxed their dynamic set with three encores and closed by inviting the closest members of the standing-only audience to dance on stage. 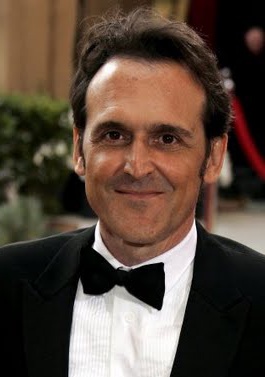 The mood changed Friday evening when the enchanting music of Oscar-nominated Spanish film composer Alberto Iglesias (left, “The Constant Gardener”) was performed at the Ghent Music Centre by the Flemish Radio Orchestra conducted by Dirk Brosse. His deeply evocative score for the new Marc Foster film “The Kite Runner” was followed by a suite of themes from the many Pedro Almodovar movies he has scored including “Volver,” “Bad Education,” “Talk to Me” and “All About My Mother.”

The three-day event closed on Saturday with performances at the Music Centre as part of the World Soundtrack Awards. British composer Harry Gregson-Williams conducted the Flemish Radio Orchestra playing some of his sweeping themes from the “Shrek” films, “Seraphim Falls,” “Gone Baby Gone” and “The Chronicles of Narnia: the Lion, the Witch and the Wardrobe.”

The evening included a jazz piece by Belgian composer Jeff Neve accompanied by intriguing clips from the movie “With Friends Like These” and a rousing suite of music by Greek composer Mikis Theodorakis (“Zorba the Greek”) who was receiving a lifetime achievement award although he wasn’t present due to illness.

Another Greek composer, Evanthia Reboutsika, who won the World Soundtrack Discovery Award in 2006, provided the highlight of the show. Playing the violin accompanied by Osama Abdulrasol on a plucked zither called a qanun, she performed tracks from the movie “My Father and My Son” and drew rapturous applause from an audience that comprised festival-goers and some of the best film composers in the business including Gregson-Williams, Danna, David Arnold and triple-Oscar winner Maurice Jarre.

This review appeared in The Hollywood Reporter. Here’s more about Bajofondo