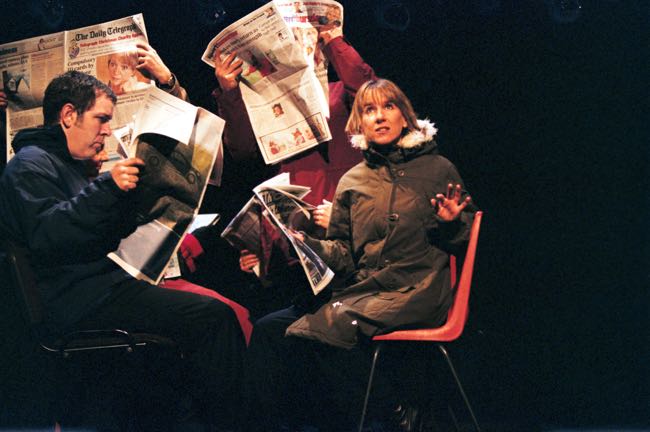 LONDON – When successive Conservative governments under Margaret Thatcher and John Major sold off most of the nationalised British rail system to private industry, former Tory prime minister Harold Macmillan described it as “selling off the family silver”.

David Hare’s powerful new documentary play about the impact of privatizing Britain’s railway system argues that it has not only robbed the country of a reliable train service but also made traveling on it very dangerous.

“Britain!” a passenger declares in the opening scene: “A beautiful country, shame we can’t run a railway.”

Central to Hare’s argument are four rail disasters that have occurred in Britain over the past six years and his play is largely based on interviews he’s done with bereaved family members of people who lost their lives in those crashes and with survivors.

Nine cast members play various roles from the businessmen who planned the rail takeover to politicians, engineers, policemen and campaigners for survivors and the bereaved. 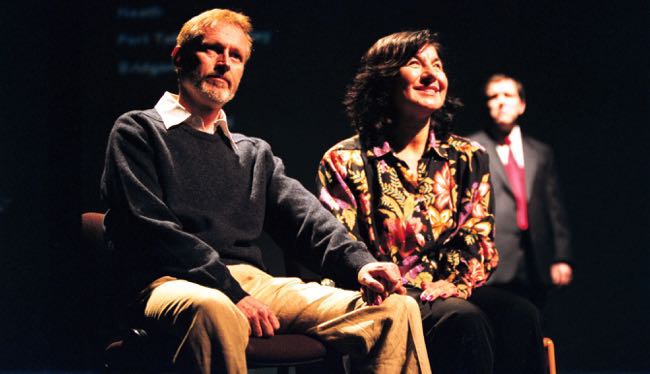 Director Max Stafford-Clark employs a stage bare except for chairs but uses a video backdrop that at first evokes the romantic view of trains chuffing across English countryside but later depicts a high-speed crash complete with searing sound effects.

For much of the time, the video screen shows a railway station timetable board displaying the routes of the trains that crashed, causing many deaths and scores of injuries.

The tone is set in the opening scene in which nine passengers await a train and express their disparate but mostly angry views of the railways directly to the audience.

In privatizing British rail, the rolling stock and passenger services were sold with geographic monopolies to an assortment of companies. The entire track — the permanent way — and responsibility for its maintenance went to another company called Railtrack.

All of the companies had seven-year licenses and part of Hare’s case is that this arrangement was a recipe for the triumph of profit over people. When the disasters occurred, all involved fled from responsibility leaving a hapless government minister to say, over and over, “This must never happen again.”

As Hare documents, it not only continued to happen but investigations proved meaningless and response to those who suffered loss or injury in the crashes was negligible.

The mother of a boy crushed to death in one rail disaster says simply, “My son was destroyed.” Another parent comes across a new acronym: VOL, meaning “value of life,” for how civil servants could evaluate the cost figure of someone who died. “They even asked me how much he spent at Christmas,” she says.

It is powerful stuff and while the politics of a domestic railway system sounds parochial, Hare’s topic is as much about the way a society deals with its responsibility for the care and safety of its citizens.

There is bleak humor in many spots and stark grief as the play gains pace over 110 minutes much like a train gathering speed. The cast is uniformly fine but Lloyd Hutchinson (pictured top with Bella Martin) stands out for the bluff characters he plays plus his wicked mimicry of a Richard Branson-like entrepreneur and British deputy minister John Prescott.

Hare’s Broadway plays have included “Plenty,” “The Secret Rapture” and “The Blue Room,” and he scripts movies such as “The Hours” and the upcoming adaptation of Jonathan Franzen’s “The Connections.” It’s impressive that he has taken the time to craft an angry political play that may not travel well but is essential viewing in Britain.

Not only that, but he continues to update “The Permanent Way” to keep it fresh, which is more than can be said for the people who run British railways.

This review appeared in The Hollywood Reporter. Photos by John Haynes.

This entry was posted in Reviews, Theatre and tagged 'The Permanent Way', David Hare, Max Stafford-Clark, National Theatre, Out of Town. Bookmark the permalink.