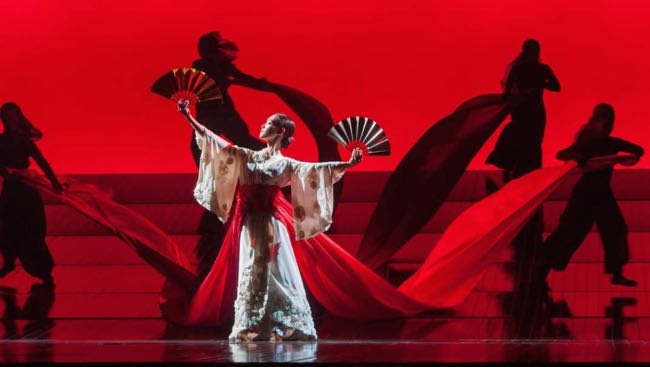 LONDON – Anthony Minghella’s production of Puccini’s “Madam Butterfly,” which is back for a short English National Opera run before it opens the New York Metropolitan Opera season in September, might not please opera purists but it is a spectacular treat for the rest of us.

While admiring the singing, London’s opera critics looked down their noses at Minghella’s ravishing interpretation although it was liked well enough to pick up the Olivier Award for best new opera production and it’s been a smash hit at the Coliseum.

Film buffs curious to know what an Oscar-winning movie director can bring to an operatic classic are well served by Minghella’s approach to the much-loved “Madam Butterfly.” His films including “The Talented Mr. Ripley,” “Cold Mountain” and the Academy Award best picture winner “The English Patient,” have in common fluidity of movement and production designs that fill the frame and fully engage the eye. Those also are among the strengths he brings to the opera.

“Madam Butterfly” is a simple tale of exploitation set in 19th century Japan. U.S. naval officer Pinkerton (Gwynn Hughes Jones) follows the established pattern of colonialists there in taking a home on a 999-year lease that can be cancelled on a month’s notice. To his delight, he discovers he can make the same arrangement with a wife, and does so knowing he can leave her at any time.

His teenaged bride, Cio-Cio-San (Janice Watson), who had been working as a form of geisha, sees things differently. Not only does she take the marriage ceremony seriously, she also converts to the sailor’s church and views herself as American.

In the tragic way of such things, not only is she then spurned by her family and community, she also faces abandonment by the man she thinks of as her husband. With designer Michael Levine, Minghella chooses not to convey the clamor of the port city of Nagasaki but rather to present the tale as a universal story of loss and loneliness.

Japanese panels slide to and fro to suggest houses, and the sloping stage has a vast mirror as backdrop so that every action and image is magnified beautifully. Han Feng’s gorgeous costumes combine with globe lanterns and multitudes of flowers to fill the stage with color.

Minghella uses Japanese Bunraku puppetry to create the children in the story and the effect is enthralling. Puccini’s music is sublime and played splendidly under conductor David Parry. Watson sings gloriously and she is well matched by Hughes Jones, Jean Rigby as her servant Suzuki, and especially David Kempster as the conscience-stricken U.S. consul Sharpless.

Opera critics may say what they will, but music lovers who appreciate what a master director can create with a cinematic eye will adore this show.