LONDON – A young intruder’s destruction of a long marriage is at the heart of Joanna Murray-Smith’s play “Honour” and it contains much insight and wisdom except that it’s inconceivable the celebrated media couple involved would never have faced the threat before. 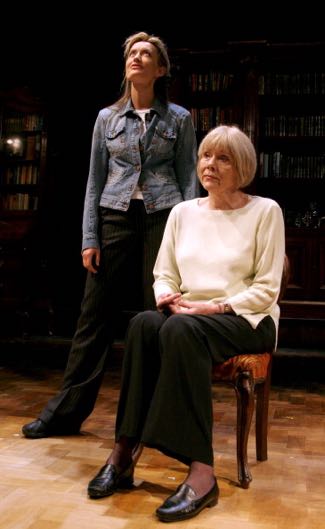 Edward Albee’s “Who’s Afraid of Virginia Woolf?” has transferred to the West End with Kathleen Turner and Bill Irwin as George and Martha, masters of the desperate art of riding out the fiercest marital storms. There’s a George (Martin Jarvis) in Murray-Smith’s play too although his wife is named Honor (Diana Rigg), but by comparison they are naivete itself and we are asked to believe that through their long marriage, this warm and caring wife of a media celebrity has never learned how to fight off the swarm of temptation.

George is a successful although slightly dimwitted veteran journalist breezily declaiming his life story and worldview to a stunning young writer named Claudia (Natascha McElhone) who is writing a biography. George is as happy to hear himself talk as Claudia is to indulge the clichés and platitudes he spouts.

In fact, she is smitten not only by his self-deprecating manner but by the illusion that the way he earned his media spurs means he is still a swaggering adventurer. George is just smitten.

The announcement that their marriage is over hits Honor out of the blue. A poet who gave up writing to support her husband’s career, Honor is aware of Claudia’s lubricious allure but, confident of her husband’s taste for comfort, she never sees it coming.

The play is rendered in a series of blackout scenes, almost all of them in George and Honor’s pleasantly middle-class home, all old wood and books. The encounters are usually one on one with George and Claudia learning their new dance as he and Honor play out their old one.

Murray-Smith gives the players some smart dialogue that suggests she knows a thing or two about relationships both fresh and deep, and she brings in the couple’s daughter, Sophie (Georgina Rich, in a solid performance) to balance the generational viewpoint.

Rigg is exceptionally good in portraying a woman whose firmament is so shaken that she is almost surprised to discover that she knows how to deal with it. Jarvis does the best he can with a poorly illuminated character while McElhone conveys both Claudia’s shrewd ability to employ her sex appeal and her vague sense of the disappointment that lies ahead.

Perhaps calling the play “Honour” while one of the main characters is named Honor displays Murray-Smith’s indecision. Albee’s Martha would never have put up with it.