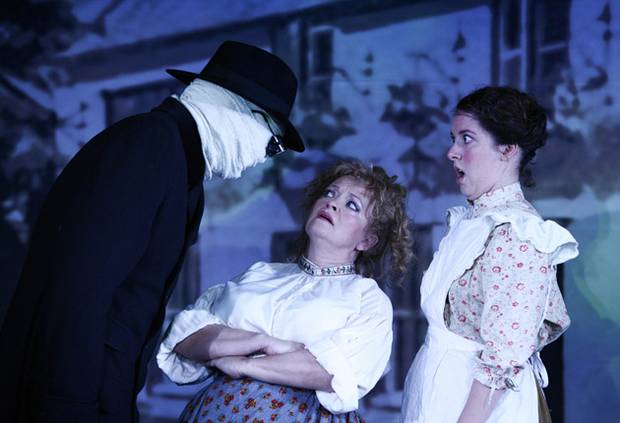 Kieve’s party pieces involve a glass of wine, a knife, a quill, a newspaper and a revolver that all float free in the air; a book-filled roll-top desk that seems to ransack itself; and the matronly, apron-clad bosom of a stout pub landlady that dances independently.

Best of all, he has the invisible man take off his bandages and gloves while smoking a cigarette and stages the venerable illusion in which a man disappears from a box. There’s also a lovable dog on a postman’s cart that barks, begs and bites, and draws some of the loudest laughs.

Playwright Ken Hill presents the H. G. Wells tale shrewdly as the production of a local amateur dramatic troupe in 1904, which allows the all-pro cast to ham it up and also is a safe cover should any of the gags go wrong, which they don’t.

The show is more of a festive romp than something destined to follow to the West End the Menier’s innovative revivals of musicals including “Sunday in the Park with George” and “Sweet Charity.” It is entertaining, but it would benefit from funnier lines, and at 140 minutes including one interval, it threatens to outstay its welcome.

Paul Farnsworth’s versatile set design allows the action to move from inside to outside a village pub where the bandaged stranger (John Gordon Sinclair) arrives to take a room and get up to no good. Surprised and outraged villagers include Maria Friedman as the landlady; Natalie Casey (pictured, right, with Sinclair and Friedman) as a screeching, randy maid; Jo Stone-Fewings as a local squire who knows more than he lets on; Christopher Goodwin as the squire’s valet, who has been everywhere and seen everything; and Geraldine Fitzgerald as a stern but sympathetic, pipe-smoking Scottish schoolmarm.

Sound designer Jason Taylor gives Sinclair’s voice a rasping and sinister delivery, and he places his speakers around the small theater so that the invisible man seems to pop up all over the place, even in the audience. Kieve has the last laugh in the sympathetic climax with another effective gag in the way the title character is finally revealed.