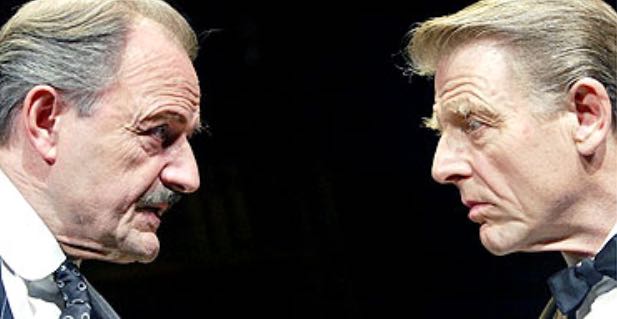 LONDON – Few things are more entertaining on stage or screen than watching two heavyweight actors match wits playing characters whose expertise is sublime duplicity. Peter Bowles and Edward Fox (pictured) go head to head in Simon Gray’s “The Old Masters” and while the play itself does not entirely convince, the players do.

They play real-life characters from the ’30s and although there are echoes of that time, little attempt is made to recreate the actual people. Fox is Bernard Berenson, a famous art historian, and Bowles is Joseph Duveen, a hugely successful art dealer.

They clash over the provenance of a “masterpiece” that Duveen wants to sell for a vast amount as the work of the artist Giorgione. Berenson, however, is on record as declaring it to be a painting by Titian and he refuses to alter his opinion. The play hinges on Duveen’s attempts to get Berenson to change his mind.

The setting is Berenson’s lovely villa near Florence where he lives with his long-suffering wife Mary (Barbara Jefford) and an indulgent assistant named Nicky (Sally Dexter), who is also his mistress. The two women both chide and protect the art historian and forgive him his diversions with the occasional Swedish masseuse.

It would be a bucolic setting were it not for the fact that Berenson is a Lithuanian Jew and the pre-World War Two rise of Italian fascism is an ever-darkening cloud. The growing threat of terror underpins the duel between Berenson and Duveen that might otherwise be merely fiscal and in that carefree way of the wealthy, almost trivial.

But desperate times lie ahead and Berenson’s reputation is something to cling to as much as the two women in his life. The stakes turn out to be equally high for Duveen.

As the two loves of Berenson’s life, Jefford and Dexter are much more than bystanders and they each help bring the plays and ploys of the two men into sharp perspective. Bowles plays Duveen as a slick operator whose charm will win over most and he appears almost reluctant to win the day against a cherished friend, even if losing might ruin him.

The show belongs to Fox, however, who has grown convincingly into the very image of the upper class Englishman whose voice drips sarcasm, erudition and guile with every syllable. It’s a long way from the assassin of “The Day of the Jackal” and, in truth, a long way from Berenson, but when Fox commences a blistering speech, the feathers do fly.

This review appeared in The Hollywood Reporter. Photo by Tristram Kenton.